...after causing the demise of the world. Joel McHale conducts a lineup of mostly obscure reality stars. Special appearance by toilet baby!

Posted by TVBlogster at 9:39 AM No comments:

Email ThisBlogThis!Share to TwitterShare to FacebookShare to Pinterest
Labels: The Soup

30 Rock is winding down to it's last few episode. Liz got married. Jenna got married. It's now being revealed that Kenneth is actually a different encarnation of Clarence the angel from It's a Wonderful Life ("Jacob! Why are you doing this to me?")

But last night, the matriarch of the 30 Rock crew and the bane of Jack Donaghy's existence passed away in a horse drawn carriage in Central Park. Colleen Donaghy, Jack's hellacious mother, the woman who was going to out live us all, met her maker. Thank Thor it wasn't in an ambulance, because her father "didn't kill Germans only to end up dieing in a van."

'My Whole Life is Thunder' is the name of this episode. Very fitting, at least for this storyline. Colleen was the biggest thunder clap of all.

If only the best clips of Colleen were up on YouTube. Due to NBC's legal mumbo jumbo, there's a paltry supply. But this is basically all you need to see to get a picture of Jack's mom.


RIP Mrs. Donaghy.
Posted by TVBlogster at 9:22 AM No comments:

NTSF:SD:SUV: Christmas Will Be Terrifiying!

Before you leave this page, here's a word from an NTSF sponsor:

Posted by TVBlogster at 2:22 PM No comments:

Email ThisBlogThis!Share to TwitterShare to FacebookShare to Pinterest
Labels: NTSF:SD:SUV

If you've ever watched The League on FX, you're familiar with Rafi. He's Ruxin's brother-in-law, and he's...well.. I suppose uninhibited is one word you can use to describe him. Plus, he's super funny to the point where it's sometimes mind blowing.

Portrayed by the amazing Jason Mantzoukas, who not only gives us a character that is so hilariously gross on this show, but is also the co-host of the ever popular podcast about dumb movies called How Did This Get Made over on Earwolf.

But wait! There's more! He's appeared alongside Sasha Baron Cohen in The Dictator, written for and appeared in episodes of Childrens' Hospital and NTSF:SD:SUV and wrecked Tom Haverford's dream of a career in the mens' cologne industry as Dennis Feinstein in Parks and Recreation.

Before you start thinking I've eaten an IMDB page, here he is as Rafi, in cahoots with his intellectual equal Taco on The League:


Posted by TVBlogster at 1:17 PM No comments:

Email ThisBlogThis!Share to TwitterShare to FacebookShare to Pinterest
Labels: Jason Mantzoukas, The League 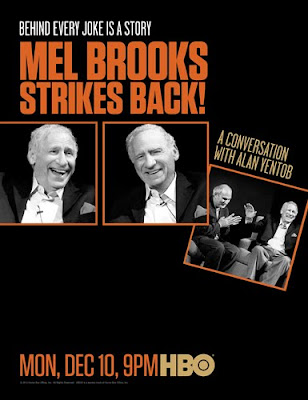 Fans of comedy should bow at the feet of Mel Brooks. Former writer of the legendary Your Show of Shows and the master behind the films Blazing Saddles, The Producers and Young Frankenstein (as well as the Broadway Musical hits they inspired), he's one of a kind.

On December 10th, HBO will premiere Mel Brooks Strikes Back, a one on one interview with Brooks, lead by BBC Creative Director Alan Yentob, taped live before an audience at the Geffen Theater in Westwood, CA. In his own irrepressible style, Brooks discusses his childhood in Brooklyn, his jewish mother's Irish accent and how Gene Wilder agreed to star in Frankenstein if Mel didn't appear in the film. Watch!

Posted by TVBlogster at 12:42 PM No comments: