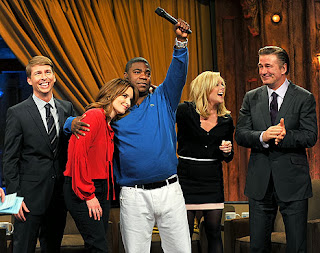 30 Rock has ended and there is nothing more I can add to the accolades and essays that have come out on the finale that aired in a one hour special last night. The only thing I can do is express my own feelings for this terrific show.

Tina Fey and the cast of characters that she and co-showrunner Robert Carlock have created are the brain children of improv - going back to Second City in Chicago where Fey and her talented friends first started - straight to New York's Upright Citizens Brigade Theatre.  This is where her incredible crew of writers and and performers came from. They brought their comedic experience into this crazy world of Liz Lemon and TGS.

The quality of the show didn't just exist in the writing. Set designers, decorators, property masters, make up, wardrobe - each and very person who worked on this show contributed a perfect Rockefeller Plaza world. As someone who started working at NBC while still in college, and for many years after graduating, I can attest that the detail paid to the interior of that large deco skyscraper was precise. Although the show was made in Long Island City at Silvercup Studios, there was never a moment when I thought they weren't within the hallowed halls and offices of 30 Rock. I now live in Los Angeles. Watching this show brought my New York back to me.

I used to run into 30 Rock production from time to time. One day while running errands, I saw the crew in front of 30 Rockefeller Plaza with Tracy Morgan, Will Arnett and Alec Baldwin present and waiting for their call.  One evening, before attending a Paley Center event which ironically featured 30 Rock Producer John Riggi and Jim Downey (who had a cameo in last night's episode), I encountered production trucks beside St. Patricks Cathedral and The Palace Hotel on Madison. My suspicion of this being 30 Rock production was confirmed when I saw hairdresser Richard Esposito (also featured last night) walk out of a trailer.

For me, 30 Rock isn't just the end of a series, it's the end of an era - a period of time when alternative comedy came out of the shadows and found an audience - small - but at least they were there.

There's so much I can say about this show ending, and I bet I'll edit this post a few times before I feel I've said all there is to say.  As I grow weary of showbiz, television and comedy, as jobs I have been qualified for slipped away, as blogs I've written are ignored, as the money evaporates, despite how hard I've tried...this show gave me an escape from from reality by making reality funny.

Posted by TVBlogster at 3:36 PM No comments: