The comedians of planet Earth have come together once again to bring some happiness and food on the tables of Los Angeles' less fortunate. For the past several years, comedian Scott Aukerman and various funny people of the alterative comedy scene have banded to together to record an album of hilarious song spoofs, culminating into a video that sends up yet celebrates the music videos of yore. Last year, they recreated Bob Geldolf's "Do They Know It's Christmas?" to amazing results. This year, they've given Quincy Jones and the plethora of 80's talent a nod by unearthing their version of "We Are The World". Of course, an album of funny Christmas tunes sung by Sarah Silverman, Kevin Nealon, Loraine Newman and a boat load of familiar and funny people is also available for purchase at www.aspecialthing.com on CD or download at www.earwolf.com.

Here's this years video with an introduction by Kurt Russell. "We Are The World".

Posted by TVBlogster at 11:17 PM No comments:

Posted by TVBlogster at 9:26 AM No comments:

Whip Your Hair Back and Forth

Posted by TVBlogster at 12:50 AM No comments: 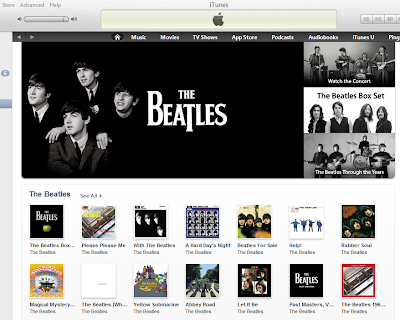 Just seeing The Beatles dial in to the 21st Century of digital downloads makes this music fan happy. Of course, most people who love this infamous band probably already own their albums and CDs. Yet, sometimes you just don't have that one song - the one track listed on your hard drive a few years ago, before the day you slammed your laptop in anger and murdered it after it lost an entire article you laboriously had to pull out of your empty brain like a lost Chilean miner. I still don't have Yellow Submarine in my current computer. Problem solved! Download it.

This is a major deal whose time has come. Hurrah Beatles!
Posted by TVBlogster at 4:49 PM No comments: 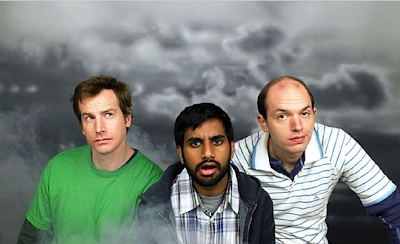 The three headed comedy monster known as Human Giant, came together for a reunion at the Cinefamily Theater in Los Angeles last night. Sketches from their MTV series of the same name were screened as creators Rob Huebel, Paul Scheer, Aziz Ansari and Jason Woliner hosted with inside stories about the process of producing the show and some juicy tales thrown in for good measure. Sorry... we've been made to adhere to the "cone of silence" - meaning that we will be destroyed and lives of our loved ones will be obliterated if we, the privileged one hundred breathing beings in the venue, even leak out what was uttered by the foursome.

However, I'm going to dish some morsels of interest. When Human Giant hosted a 24 hour marathon in May of 2007 (the concept was - if they received one million hits on their MTV site, they'd be renewed for a season two), it garnered the lowest ratings the cable channel had ever seen since Carson Daly's post 9-11 show. (Although the marathon did rate well with the young boys demographic.) Also, Rob Riggle, one of the guests on the show who played the character of Cliff Clavin (sp?), HG's security guard throughout he live event, got pissing drunk back stage. But after 24 hours of non-stop comedy with friends - can you blame him?

Viewing the sketches on a movie screen with a small crowd was more fun than imagined. I'm used to watching the show at home, alone like a loser, and cackling in my own space. It was a blast to join in and watch my favorite bits, "Let's Go!", "Balloon Cops", "Shutterbugs", and "The Illusionators" with a like minded group and the Human Giant guys themselves laughing along. It reminded me how much fun this show was, and how much we all hope for a season three. Hell, we'd be happy if season two landed on DVD; yet, the probability of that is slim right now. Apparently, MTV wants Human Giant to return for season three, and if they're not able to do this, they are holding the season two DVD hostage. Problem is - these guys are too busy to come together. When not involved in other projects, Paul is finding amazing success on FX's The League, Rob is super funny on the popular Adult Swim's Childrens Hospital plus working on a project for Ben Stiller's Red Hour Films, Aziz is working on NBC's massive hit Parks and Recreation (returning in January) and also writing a film with Jason Woliner. So...season three? You're a dream. Season two DVD? Hope MTV is taking good care of you in captivity because these guys are busy and you might not see daylight for a long time.

Friends and collaborators on Human Giant were in attendance last night. Writer Eric Appel and Nick Kroll were in the house, as well as friends Lake Bell and Doug Benson. 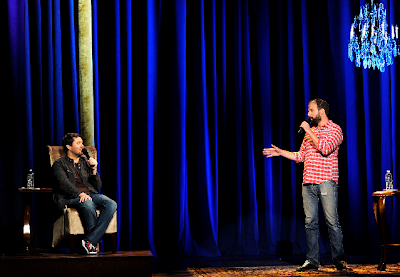 The Benson Interruption premiered a few weeks ago on Comedy Central. It airs Fridays at 12midnight and is a fun version of Doug's live show that found a home at LA's Largo until cable came-a-calling. I attended a taping at the Music Box Theater in Hollywood a week ago with Rob Huebel, Eugene Mirman and Mary Lynn Rajskub that's already aired. (I must say - that was fast!)

Although I don't know Doug, whenever I see him perform, it's like hanging with a friend. The admiration between Benson and the performers was and is always palpable. These are some of the funniest people in the biz., and have done the Interruption before, so they knew the flow. (Although Mirman may have been off track with Doug interrupting him). The behind the scenes banter, plus taped retakes were hilarious. Chat about what they can and cannot say on air - which actually did make it on air - punctuated how reigned in the program has to be compared to the live stage show. Yet, trying to skirt around the naughty bits made it even funnier. Still, what you see as the finished, edited product, is fantastic. Watch this show.
Posted by TVBlogster at 8:54 AM No comments:

TBS's comedy landscape changes tonight with the premiere of Conan at 11pm.

While getting ready for his long awaited show, Conan took some time off to make an American Express commercial.

Posted by TVBlogster at 5:43 PM No comments: 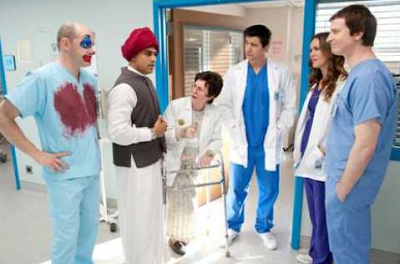 Ok, so it really wasn't live. I'll admit it. I had a feeling the "LIVE" thing wasn't real, but I wanted to believe. Yet, my life is so busy, that honestly, I can't keep up with the inside jokes my favorite comedians hatch while fooling the crowd. However, I was riding that wave of sort of belief - until the first second after midnight when it dawned on this viewer that it just didn't feel "Live".

Yet, the concept was sort of genius. In essence, the "live" aspect wasn't a lie. Last night's finale "The Sultan's Finger" (or was it them giving it to us?) was pretty much taped "live", not in front of a studio audience, but in a live flow without edits (not to my naked eye). Also, Childrens Hospital's conceit is a send up of various self important (and although good, sometimes ridiculous) hospital dramas like ER, the now classic show that once broadcast an episode live.

So, well done, David Wain and crew. Standing back a bit, I see the big picture, and it totally worked. Plus - it was incredibly hilarious.

In conclusion, I had two revelations last night: 1) I can never EVER get enough of Jon Hamm's funny cameos because he's gorgeous and a solid comedian and 2) Ken Marino is a cutie when he cuts off his finger and is in supreme agony. (Sorry, I have to go all girlie once in a while).

Production on season two of Childrens Hospital will begin in December.
Posted by TVBlogster at 11:02 AM No comments: 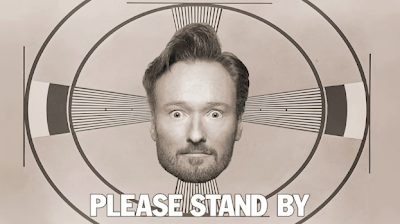 Are you excited? I am. 11pm Monday!
Posted by TVBlogster at 8:07 PM No comments:

Posted by TVBlogster at 4:21 PM No comments:

Someone reminded me that 70% store bought - 30% fresh cooking maven Sandra Lee of The Food Network is Andrew Cuomo's girlfriend. Make that the new Governor of New York Andrew Cuomo. That means Simple Sandie is the first lady of The Empire State, my home state.

With the holidays down the pike, my thoughts hearken back to Sandra's famous Kwanzaa cake - the most ridiculous and insulting cake ever made. This lump of weird was made with the freshest canned apples and day old bargain sponge cake from Pathmark. And those yummo corn nuts (not "acorns"- not where I live) are so festive, forget they have no place anywhere near that unfortunate pile of ingredients. If you choke on one, just use one of those big ass candles to stick down your throat to dislodge the nut obstruction, or to induce vomiting. Your choice. It's a free country. Cooking is fun!

I wrote something about the yin and yang of The Food Network, featuring Sandra Lee and Ina Garten - two women on opposite ends of the earth when it comes to food preparation. Ina wins.
Posted by TVBlogster at 3:49 PM No comments:

...(because the show does take place in Brazil)....it's Childrens Hospital on Adult Swim! 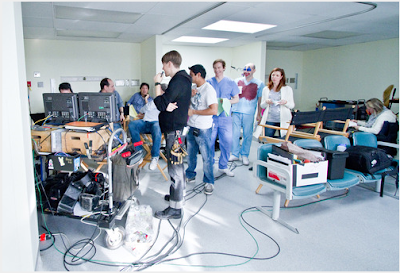 (Rehearsals: Photo via Rob Huebel)
Rob Corddry and the cast and crew of Childrens Hospital are so cool and cocky now, they're doing the show's season finale LIVE this Sunday on Adult Swim. That's going to be 15 minutes of awesome, so watch the show.
Posted by TVBlogster at 4:58 PM No comments:

The Benson Interruption Premieres on Friday!

This blog has been talking about it - now it's real: The Benson Interruption finally makes its way to air on Comedy Central tomorrow at 12:00AM and will broadcast the same day and time until infinity, we hope. It's a fun night with comedian Doug Benson as he sits on stage and showcases some funny people who will be constantly interrupted by the host with his jokes and banter. Upcoming guests will be Patton Oswalt, Nick Kroll and Eugene Mirman plus so many more.

I'll be attending a taping tonight. The guests are usually a surprise, so I'm clueless. Should be fun. Watch it! Friday! (Or Saturday AM if you're going to be specific.)

Here's a peak - with Nick Swardson:

Posted by TVBlogster at 3:08 PM No comments: 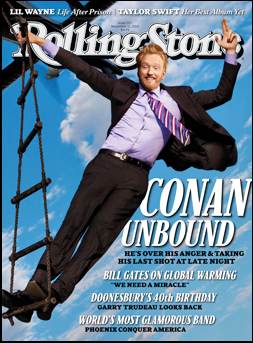 Check out Rolling Stone magazine this month! Conan's in there!

Also, if you can't wait to see the premiere of Conan on TBS on November 8th, O'Brien and his staff will provide. Starting tonight at 11pm ET/8pm PT, Team Coco will start streaming Show Zero online to kick off the comedy. You can find it on TeamCoco.com, YouTube and Facebook.com/TEAMCOCO

Finally, Andy Richter was interviewed for the NYPost to discuss how Conan on TBS will be different than Late Night or The Tonight Show. He's also pretty content that ratings have shown Leno to be garnering less ratings than Conan did this time last year.
Posted by TVBlogster at 9:55 AM No comments: