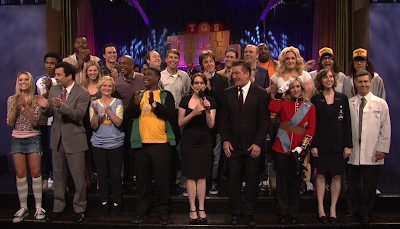 You didn't think I was going to let the month of April get away with only one posting, did you? I almost did. A transition to a new job has me preoccupied, flustered, unhappy,  making me question my choices in life. I've been bereft of words to describe and keep track of all I love in television and comedy. However, it's time to get out of my head and onto the screen for some words about an auspicious occasion that took place this past Thursday night: The second annual live airing of 30 Rock.

The United States, being a large country attached to a massive continent, allowed our time zone situation to provide our eyes and ears with two brilliant, yet slightly different takes of the episode "Live from Studio 6H" with separate east coast and west coast broadcasts direct from 30 Rockefeller Plaza. The plot of both airings was a celebration of the golden years of live television by setting up the premise that 'TGS' would no longer be going live due to budget constraints set upon by their crappy parent company Kabletown.

So, who better than NBC stalker Kenneth Parcel to lock everyone in a dressing room and expound on the virtues (and racism) of NBC pretend live television past, which is what he did. Snark infused send ups of The Huntley Report (Jon Hamm on east coast/Brian Williams on west coast), Laugh In (Alec Baldwin as Nixon on east coast/Baldwin as Paul Lynn on west coast),  The Honeymooners, The Dean Martin Show, Amos and Andy, re-imagined as "Alphie and Abner" with Hamm and Morgan poking a stick at racism in side splitting fashion,  and cigarette ads that turned to class action suit PSA's featuring  the awesome Dr. Spaceman.

Cameos as Amy Poehler as the young Liz Lemon spending her prom night (east coast)/sweet sixteen (west coast) night languishing in her basement happily eating cheese steaks while watching a telethon and making prank phone calls to a "General Electric" with the young Jack Donaghy, played by Jimmy Fallon, picking up the call. Donald Glover portrayed the young Tracy Jordan, who discovered his talent for being a "ridiculous man" on the same telethon.  Jenna, whose love for Paul, her drag queen doppelganger, is solidified when he appeared during a live TGS sketch floating down from the heavens singing 'Zou Bisou Bisou' ready to propose marriage. Fred Armisen was the featured background player and stand in for Judah Friedlander while he was off sketching it up on another set.

One confounding difference between the two time zone broadcasts was the walk on by Sir Paul McCartney during the east coast transmission, and the appearance of Kim Kardashian's walk through on the west coast. Talk about an inbalance. If you can't get Sir Paul for both broadcasts, at least find someone with equal esteem. Kim Kardashian? No.

The live broadcasts of 30 Rock may be seen as a ratings gimmick. So what if they are? If ratings motivates a network to allow a filmed episodic sitcom whose very essence is being meta to go live for Nielsen, then so be it. As the television season winds down, 30 Rock going live was a refreshing infusion of fun, no matter which coast you were on.

Posted by TVBlogster at 1:36 PM No comments:

Paul F. Tompkins is one of the most terrific comedians in the whole damn world that not enough people know about. Although I root for the path to fame to stretch out before him, Paul is one of those treasures you kind of, sort of hope doesn't get too exposed because you want him all to yourself. I've spent many intimate Saturday evenings at Largo in Los Angeles enjoying his monthly show with a few hundred other people. He's all ours, damn you! However, he's brilliant, with a talent that should be shared.

Last night Comedy Central aired Paul's stand up special Paul F. Tompkins: Laboring Under Delusions. I'm in New York. I was on a train when this aired, and when I got back to my hotel hoping that Comedy Central would repeat it while my eyes were still open, a dumb comedy movie came on instead. Alas, with the DVD of uncensored and extended scenes ready for release on Tuesday 4/24, there is something to look forward to.

In the meantime, I was overjoyed to find this extra scene made available online. Paul closes out the special the same as he does each month with his musical partner in comedy Eban Schletter at his show at Largo at the Coronet, with the tear jerking ballad, Danny Boy.

Posted by TVBlogster at 9:56 AM No comments: