'New Girl': Jess Meets Someone Who Hates Her 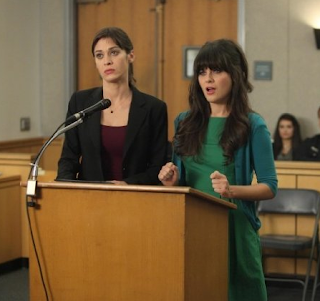 Record scratch! What? How can you NOT be a dessert person? In last night's episode of New Girl ('Jess & Julia'), Nick's new squeeze Julia, turned off by the adorkableness of Jess, turns down her offer of a cupcake. "I'm not a dessert person" she said.  In one fell swoop, Jess had her number. How can you resist dessert?

So when Jess handed over the cupcake of friendship to Julia last night, all hopes of besties between two funny brunettes came crashing to a halt. Julia, played by Lizzy Caplan, terrific, snarky lady of Party Down (a moment of silence please...RIP) is Nick's new love interest. No, she does not want to know where Jess' secret tampon supply is hidden. No, as an attorney whose been there done that -she is not enamored with the bubbly Katy Perry doppleganger's loveable loopiness. No, Julia will not live in the land of 'Adorkable'. Seeing Jess hurt over this situation was so sad, it was like kicking a puppy.

In the end, they saw eye to eye. Julia and Nick find common ground about their budding relationship, even using her lawyer skills try and help Jess argue a traffic violation in court; however, Adorkable wanted to plead her own case. $800 later, Jess and Julia unite in girlship. Julia accepts Jess' ribbon hat and flakey ways, and Jess forgives her dessert blindness. The boys? They use each others towels to dry off their junk. Sometimes Nick wears Schmidt's underwear which infuriates him. Gee, I don't know why.

There was a brunette trifecta last night. In addition to the highly likeable Deschannel and Caplan, the awesome June Diane Raphael joined in.

Posted by TVBlogster at 1:42 PM