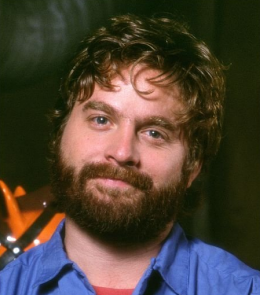 Star of HBO's Bored to Death, FunnyorDie's Between Two Ferns, and big time theatrical hit The Hangover, Zach's brand of surreal humor will lend a nice insane twist to the show. It's great to see him reach his current streak of success. He was on Late Night with Conan O'Brien a few years back. He tinkered dreamily on a piano while cracking funny and brilliantly clever comments. He just had that something. Comedy fans at LA' s Largo, a venue where he performed often in those days (and today as well), knew of his brilliance. The Late Night gig was a glimpse into their secret. On that night, I could sense we'd be hearing more from him. He was endearing, sublime, furious, sweet and raunchy. How wonderful to see his talents recognized and now allowed to flourish on one of comedy's biggest stages. I'm looking forward to this!
Posted by TVBlogster at 9:46 AM