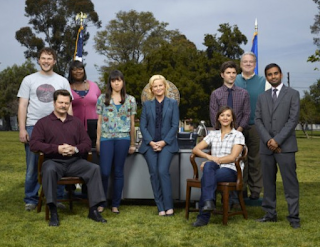 It's been a long, cold, lonely television winter without the superb Parks and Recreation on air. After a long wait, the government arm of Pawnee will be back with with new cast members Adam Scott (Party Down) and Rob Lowe (sex tape, Austin Powers) joining Amy Poehler and cast for a new chapter. Best of all, Nick Offerman (aka Ron Swanson) and his mustache joins us once again.

Last we left the Parks and Recreation office, lack of money in the budget forced it to close down - much to the delight of breakfast loving Ron, whose hatred of government made him as happy as feasting upon a table full of bacon and eggs. Also, love is in the air. Andy and April, who are currently on the outs, most likely won't be for long. Tom, hoping to woo his ex-wife back into his life, might be winning the battle (if my memory serves). Chris (Lowe) has the hots for Annie. Ben (Scott) and Leslie have this "thing" - not sure what it is - but it might bubble into love more interesting and funnier than what NBC's own Perfect Couples is going to cook up.

And here is where I could transition into a discussion on the aforementioned Perfect Couples, starring The Daily Show's and G4's girl nerd wannabe, Olivia Munn. If it's a hit, and the world loves the tired old quirks of what looks like contrived comedy - then, I say enjoy. As Ronna and Beverly say..."not for me." (Watch it be a hit - along with CBS's Mad Love - a sitcom with How I Met Your Mother undertones. Considering CBS already has the terrific HIMYM, it's astonishing how they'd give us a new mangled version starring Sarah Chalke. I've actually viewed the pilot. Sadly, it's painful.)

Parks and Recreation airs tonight and every Thursday at 9:30pm ET/8:30pm CT.
Posted by TVBlogster at 9:51 AM

Email ThisBlogThis!Share to TwitterShare to FacebookShare to Pinterest
Labels: Parks and Recreation