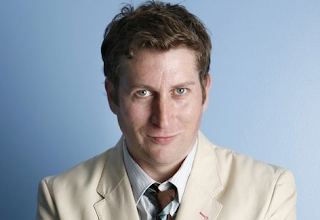 In a world where quirky television comedies run their course or get canceled by the man, we find hope for a beleaguered niche of comedy lovers. Comedy Death Ray has arrived at IFC, and not a moment too soon.

Host and creator Scott Aukerman brings his CDR name brand to IFC's thrice a week 90 minute comedy block, filled with shows of old that have influenced the tone of sitcoms within the past 15 years. Mr. Show, The Larry Sanders Show, Arrested Development, Undeclared, Freaks and Geeks, The Ben Stiller Show will air in various combinations on Mondays, Wednesdays and Fridays at 10pm. These shows fall under the file "Brilliant But Canceled" (my favorite category); however, some just simply ran their course.

Here we see how the tone of today's comedy, whether it be single camera sitcoms, ironic twists, meta references and organic focus whether absurd or straight, found it's roots. Scott also interviews his funny friends who give their own insight on these groundbreaking programs.