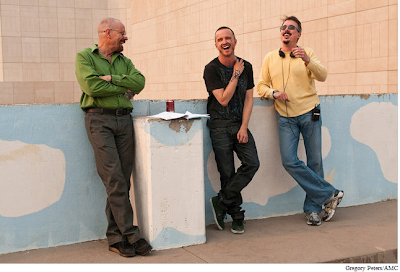 See? It's not real. Look at those crazy Breaking Bad boys laughing in that picture above. Walter White and Jesse Pinkman are just fictional characters Vincent Gilligan concocted. So, last night's incredible, horrific season premiere was not real. Jesse is really Aaron Paul, a guy who is not a street criminal turned murderer with a heart calloused over by the many violent, gut explosive situations he's been through. He's really a cool, talented, Emmy Award winning actor who made a character turn from sniveling little drug dealer with family issues, into a raving, fucked up killer. Walter is really Emmy Award winning Bryan Cranston, the cool dad from Malcolm in the Middle, a funny man who booked roles as a weirdo (see weirdo dentist in Seinfeld, and weirdo neighbor in King of Queens) with a loving daughter who fainted during the Breaking Bad premiere screening during THAT scene. Giancarlo Esposito is a nice man and incredibly fine actor who just joined ABC's Once Upon A Time in a major recurring role. See? He's not really a cold, steely, terrifying, placid maniac who is the most frightening monster on Earth. He's really cool. I'd wager a guess that he only uses box cutters to open boxes, or one of those blister packs when he buys a new set of earphones.

And David Costabile will always be the ever faithful and sweet Doug, husband to Mel on Flight of the Conchords. He's not dead. Those lab notes aren't real.

See? It's all a fevered dream. And Jess...um...Aaron isn't going to pop a bullet in Gilligan in that photo above, and Cranston isn't going to burn a hole in his chest with an evil stare, telling him it's time to make the meth. No. They're going to head over to Craft Services in a minute.

Breaking Bad premiered last night, and it didn't skirt away from it's reputation of being bad ass, explosive television. Watch it on Sundays at 10pm. And wear a diaper.
Posted by TVBlogster at 1:12 PM