For everyone who makes fun of Mike & Molly, listen up: Melissa McCarthy is awesome, and she was just nominated for an Emmy for Outstanding Actress in a Comedy Series - for a show everyone too-hip-for-the-room loves to make fun of. Congratulations to her! 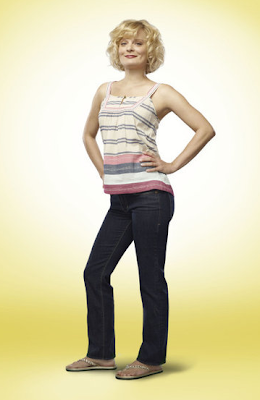 And in a surprising, yet not really surprising twist - Randee Heller, who gaves us the irrepressible, cranky and once "hell cat" Mrs. Blankenship on Mad Men was nominated for Outstanding Guest Actress in a Drama Series. If she doesn't win, I will be disappointed. As much as I like fellow Mets fan Julia Stiles and the other ladies in this category - Loretta Devine, Alfre Woodard, Joan Cusak and Cara Buono (who portrayed Faye on Mad Men) - I don't think the competition can measure up to Heller's fantastic performance. Heller went from attractive, relatively young woman, to dowdy 60's matron convincingly. Blakenship wasn't just a character, she was a force who shuffled off this mortal coil the same way she shuffled into Don Draper's office. 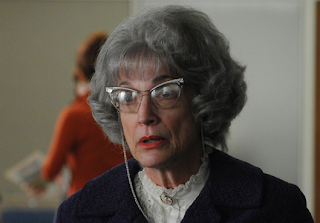 But you know what sucks on this Emmy nomination day? The snubbing of Nick Offerman as Ron Swanson. As someone on Gawker said earlier today and I'm paraphrasing: "I can live with this knowing that Ron Swanson would have hated to have been nominated." 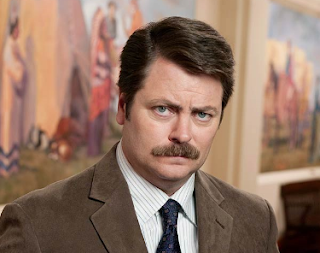 However, great news for his show Parks and Recreation, grabbing its first Emmy Nomination in Best Comedy Series category. Even though NATAS' darling comedy of the century - Modern Family - will probably kick ass on September 18th, it's so good to see not only the most refreshing show on television get recognized, but one of its' stars, Amy Poehler, get an Outstanding Actress in a Comedy nomination as well. (The outstanding funny ladies in a comedy series category is brimming with talent. Tina Fey, Laura Linney, Martha and Melissa....a tough category indeed). 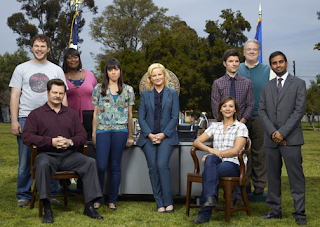 Oh, and Community was robbed. They deserve at least top writing credit for some creativity. Perhaps their quirky approach leaned a bit on the gimmicky side, and turned off some NATAS voters? 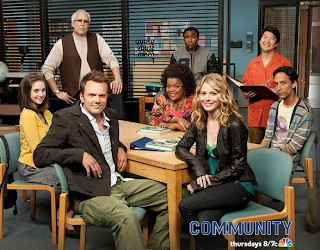 Full listing of Emmy nominations on NYTimes. com.
Posted by TVBlogster at 12:02 PM