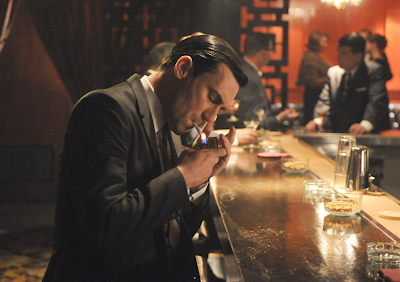 There were ghosts in the season finale of Mad Men. The Phantom floated and wafted through the lives of our SCDP team, still reeling from the suicide of Lane Pryce. Everyone is chasing him - Megan chasing her acting dream, Pete chasing a woman who is now a shadow of herself, as he wallows in the suburbs with a wife and child to whom he cannot connect. Even Don faced his demons in visions of brother Adam, the first suicide casualty caused by his need to alienate those who have emotions he will not touch, nor understand.  It's weighing on him like that toothache.

It was a lackluster episode with too much Pete and Beth and not enough Peggy, or Ginsberg, or as Mo Ryan of the Huffington Post put it perfectly - not enough Dawn, not just in this episode, but the entire season.  Although I've covered the goodbyes of season five (see Lane Pryce and Peggy Olsen's departure below), this series moved along like a slow ocean liner, lumbering on rough waves of 60's unrest, not being rocked or touched in any way. With the civil rights movement and cultural change, why are we seeing Peggy still dress in teased hair and boxy dresses? Why did we not see Dawn's dealings with the racial slur mentioned in the first few scenes of tonight's show from that idiotic client? At least we did see Miss Olsen, with that damn teased hair, struggle with the new initiatives of her new boss. There's still hope for Peggy as she spreads her wings, but how long will that last?

Sterling Cooper Draper Pryce is expanding, and business, for now, is booming. We leave Don as screwed up as ever,  dealing with the complacency of marriage and fidelity.  Has Megan's expiration date passed?  When he walked away from the commercial shoot, was he walking away from that marriage? Walking away from the same vision that brought Betty into his life? (If you recall, she was a fledgling model he met at a photo shoot.) 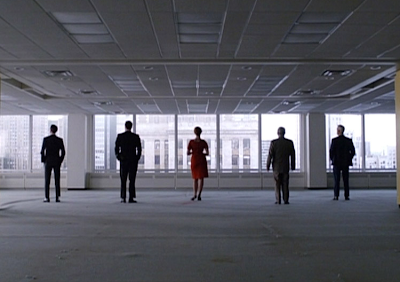 With the ladies offering companionship in smokey bars, we can only guess the old Don will be back next year. This season's Draper was a mere ghost of his old self. Talk about phantoms.

Posted by TVBlogster at 9:06 PM