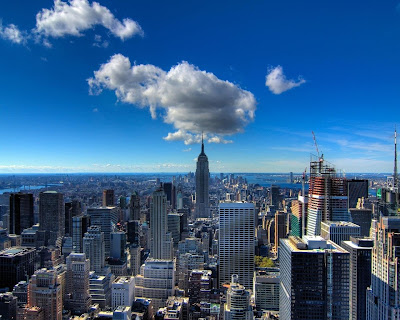 Eleven years ago today, I was stuck on the now defunct #9 train heading downtown to West 18th Street to get to my job in Chelsea. We were stopped between 28th and 23rd streets due to, what the MTA engineers are trained to say, "an incident downtown, possible sick passenger".

All I could think of on that post Labor Day morning was how I hated the white capri pants I wore and the ugly lavender tank top that did nothing for my large torso. We were stuck for only ten minutes, but we slowly made our way south. Finally, I got off at 18th & 7th and headed for La Petite Abielle, for my morning coffee routine.

Up on sixth avenue, I saw a crowd on the corner looking downtown. That spot. The corner of 18th and 6th, held a picture postcard view. Every morning I stood there, waiting for the light, marveling at the perfection of this small plot of real estate - 6th at 18th - west side of the street. Look left and you can see the Empire State Building loom large overhead. Look right, and you'd see the majestic giant towers of the WTC, peering over buildings and trees. Best spot in the world, I thought. Thank God I'm a New Yorker.

That day, when I joined the crowd of people standing on the corner, I looked to my right, and saw that horrible site. The north tower ripped open with black horrible smoke pouring. Flames.

"A 737 plane hit the tower." said a man with a transitor radio eaplug in his ear. "And another small plane hit the other one", a vision a bit harder to see since the damage of the south tower was partially obstructed by the north one.

Then a song entered in my head. A Tori Amos song that always comes to mind when I'd hear of a plane crashing:

"Not the red baron. Not Charlie Brown. Think I've got the message figured. Another pilot down."

It was a perfect day. Clear as a bell. What's wrong with air traffic control?

I was shaking as I crossed the street, zombie-like - looking into the eyes of people heading to where I had just been, looking to see if they knew, if they had already seen the damage - looking at them as if to say, your eyes about to see something horrible.

When I got to the office and watched the news, it became clear. Terrorists did this.

That Amos earworm was still wiggling. The song would not leave my head:

Then as more planes crashed - one in the Pentagon and another in a field in PA, the tune in my brain changed to Dylan's "Masters of War".

My whole psyche is on a mixed playlist.

Life wasn't funny for a while. Some of my neighbors perished. The smoke wafted over the upper west side where I lived. The trains were a mess. And that smell. That acrid electrical burning rubber smell. For months, that smell. For a few weeks, Baseball stopped. Television stopped, save for constant news coverage.

Comedy stopped for weeks, especially the New York based talk shows. Dave, Conan, Jon - all shut down. Dark. But they returned a week later, these jesters, always ready with a satirical shot provided a mixture of confusion, anger and pain. As a comedy fan, I turned to these comic heroes for solace, and found comforted in their humble state, in how as New Yorkers themselves (adopted through years of living there) shared the experience, up close, with a skyline viewed every day, part of our landscape, now destroyed. In this historic time, they took to the camera with pain, confusion, caution, all too aware of the question, "Is it too soon to make joke?"

It turned out, a joke was exactly what we needed.

I've found a few videos on YouTube featuring Jon Stewart, Conan O'Brien and David Letterman dealing with the aftermath of the WTC attack. Sadly, SNL's return with Guiliani and Lorne Michael asking if it was okay to be funny again is lost to copyright issues.