Mad Men: Shut The Door. Have a Seat. 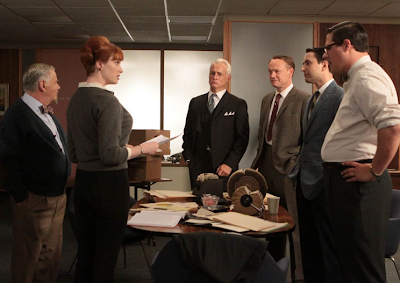 Does anyone know what I can do about the rug burn on my chin? For the past three Sunday nights my jaw has dropped to the floor at the remarkable output from Mad Men. First, Don Draper's true identity is discovered by Betty whereby massive emotional baggage crashed on the Ossining household. The following week gave us Betty confronting Don about a divorce. Now this: a sensational season finale to top all Mad Men toppers for the past three years.

It was a heist in Oceans 11 proportions, paced with exhilarating precision and quick thinking. It gathered the all stars of expertise to join forces against McCann's take over, adding a big fuck you to PPL who started the whole mess. At the center of it all was Don Draper, flashing back to his father's own uprising against the man. Hopefully he won't get kicked in the face by a horse. Foreshadowing? I hope not. With the final nail on his marriage's coffin, it appears as though a new chapter has been opened for Draper, one of liberation from the facade life he created for himself - ripped from the very ads he creates.

So what does a group of ad men do when they're under contract with SC? Why, get Lane Pryce to fire you, then foster a mastermind plan to round up confidants, tell everyone the carpets are being cleaned over the weekend, and then use that said weekend to steal away clients and create their own agency of course! This where the Draper effect flourished. The flashes of his father, the desperation of the Depression all gave Don the wherewithal and gumption to rise above the injustice of business. Perhaps Connie Hilton opened the door, it only took the final push by PPL to spur him into action. It was as beautiful as seeing the fabulous Joan Holloway walk through the door. Ah...Joan and Roger. How lovely they looked together when he told her he couldn't read her handwriting.

The cherry on top for me was seeing the downtrodden Lane Pryce be a player in the plans, along with a big "Thank You! Merry Christmas!" thrown in for good measure. I'm thrilled he's going to be sticking around; however, his homesick wife might not feel the same. 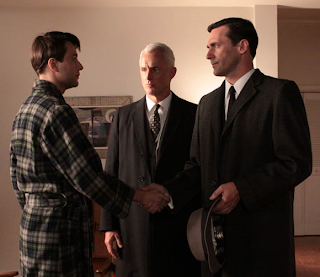 After a few seasons of watching Don be a total hard ass to his staff, it was fine sight to see him have to tactifully make his plea to get everyone one his side. Pete Campbell has been looked over for years, seeking Don's fatherly approval like Don sought paternal guidance from Conrad Hilton. Pete, fed up with work and home "sick" so he could attend an interview at Ogilvy, was finally in the driver's seat. For Don, it was time for retribution, chilling out his superior hold over Campbell, and letting him take on the big role he's wanted for years.

And then there's Peggy Olsen.

"What if I say no. You'll never speak to me again"

"No. I will spend the rest of my life trying to hire you."

Don and Peggy. Two people cut from the same emotional cloth. Good for Peggy in standing her ground when Don "told" her to join their side. Why should she? Her talents could be cherished elsewhere, but the fact is - they need each other. Don knows this. Peggy, perhaps not. It was a revelation to see Don's act of contrition in her home. Their interchange was remarkable. It's easy to know that someone is and extension of you, but it's easier to take for granted that the person is an individual who might not want to go in the same direction. Don had to learn this fast, or else he was going to lose one of the best ad persons around. In turn, Peggy's relationship has now changed. She is finally on level of respect and common ground. 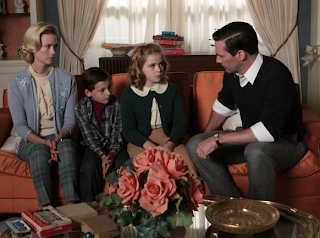 Meanwhile, Christmas is in the air, and Betty's off to Reno for a quickie divorce. She is not going to find her life boat in Henry Francis. Once he starts to treat her like the china doll who can't think like an adult, that old case of ennui will return. Yet, she did built herself a nice safety net didn't she? It will be interesting to see how Betty's psyche will survive this turmultuous decade. Other women longed for independence, yet Mrs. Draper longs for a man to save her - a trait that is not so unheard of for women of her social status and generation. Although Don is no saint by any means, it was a relief to watch this marriage end. Tied to the ice princess, he was stuck living a dream he may not have envisaged. Sadly, their kids will probably be emotionally screwed, and I can see a teenaged Sally rebelling against her mother as her little brother drops out and joins a commune somewhere. Still, the scene with the children was heart breaking. 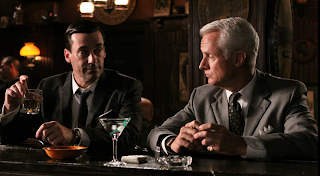 It was also good to see Roger and Don back at the bar throwing back a few once again. Two old buddies who fought a couple of battles, especially amongst themselves, joined together for the war. Roger dropping the Henry Francis bomb didn't even ruin it.

What a superb episode. Riveting, emotionally satisfying, there was not one wasted scene. They'll be an Emmy for writing on this finale. But I'm getting ahead of myself. It's going to be hard to wait until next summer when Mad Men returns for season four.
Posted by TVBlogster at 11:13 AM