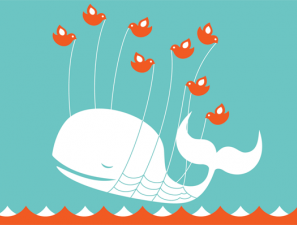 The news that a popular Twitter account called "Shit My Father Says" snagged a CBS sitcom proves the internet is harvesting new ideas for television prime time. The Twitter account was created by 28 year old Justin Halpern who moved in with his parents, and quotes crap his dad says. It's truly hilarious. But, I can't help but feel depressed about how instant opportunity is being given to someone whose output doesn't rely on talent and hard work but just a dumb idea. So does that mean ideas from legit writers and comedians are being shoved aside for concepts that arise from the popularity stemming from internet buzz? Sadness.

This is alright on one level. Sometimes incredibly funny, talented writers take video camera in hand and produce their own shows for YouTube viewers. Take Andy Samberg and Jorma Taccone, for instance. They are two funny guys who gained success by creating video shorts that eventually caught the attention of Lorne Michaels. Also, Funnyordie.com harbors a hot bed of funny writers and performers - some famous, some not - creating comedy shorts on their own individual platform that have stirred interest from HBO earlier this year when it entered into a partnership with FOD, kicking off a series for the cable network.

However, in the pithy world of micro blogging, where Halpern's father's morsels of bizarre comments are only added once every few days on Twitter, what substance can be hulled from such low maintenance work? Why not give Paul F Tomkins a television deal? His tweets are funny and he actually has a career making people laugh. What about Rob Huebel? His tweets are consistent, creative and popular. His account could easily spawn a sitcom about a guy who tweets his bizarre thoughts to the Twitterverse. I'm not saying it should happen. I'm just saying. (But I'd like to see it happen.)

Meanwhile, Halpern gets a sweet deal that many other writers and performers would kill for. What does Justin's dad think of all this? 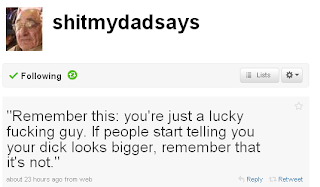 Maybe his dad should get the sitcom.
Posted by TVBlogster at 10:51 AM