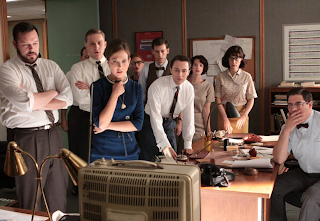 Last night's episode "The Grown Ups" was another ripping installment of Mad Men. The youthful era of Camelot screeched to a halt. The bright, young president JFK was brutally murdered. Now, it's back to the same, white haired old guy - LBJ - to take over the White House. Time for the adults to take charge. A sense of innocence now lost. It made for an explosive episode with plenty of jaw drop worthy scenes that almost out did last week's Don Draper bomb.

A stunning moment occurred when Draper came through the office, hearing a cacophony of ringing phones as the news broke on TV in Harry's office. Then - they all fell silent. It felt like the crescendo in an orchestral piece, almost the same blend of noise that swirls in The Beatles' "A Day in the Life"...and when the last crash of craziness builds into an abrupt stop, it as if the smoke clears and you've awoken from a dream. That's what happened last night. Everyone from Pete Campbell, Betty and Don Draper, and Roger Sterling stirred from their boozy slumber at the death of Kennedy. And as history has shown, the age of innocence was over.

Some fans of the show are not enamored with Pete Campbell. I find him compelling. A young, privileged punk seeking approval from Don and shimmering with a sense of entitlement (not to mention inappropriate sexual behavior toward German nannies) has been learning enough life lessons and is starting to question the establishment that has held him back. Trudy's final support of him getting ready to leave Sterling Cooper was a fine moment, not to mention that gorgeous luminous blue dress she wore when preparing to go the wedding. Mad Men wardrobe department... Bravo.

Roger. Oh, Roger you silly man going through your mid-life crisis with your child bride, your awesome ex-wife Mona, and your whiny daughter. Of course you're going to call the beautiful, strong Joan Holloway in despair over Kennedy and the botched wedding. She's your whipped cream with a dollop of strawberry jam - the red head that knows life goes on despite the tragedies. Of course, she's "the one". I almost felt sorry for Sterling at his daughter's ruined reception. But of course, life goes on. Yet, maybe life - or in this case - the wedding, should have been canceled.

I can't help it. I know he always brings the bad news to our American Sterling-Cooper-ites, chipping away at those old glory days one sip of tea at a time, but I really like Lane Pryce. You know he doesn't want to be a bother, but he has a job to do. He's quite sympathetic, and well, perhaps the fact he loves America and feels liberated being away from Blighty makes me all soppy for him. Yes, he gave Ken Cosgrove the promotion and Pete the shaft, but it had that "so sorry...so very sorry" air about it.

I cannot stand Henry Francis. Is it the casting? Is it my shallow self wanting Betty Draper to fall for someone who is just as good looking as Don? There is no real chemistry between them. They hardly know each other. Will she leave Don, a man she never really knew, for another man she doesn't really know? This lady is just in love with that fantasy...the romantic tragedy of it all. 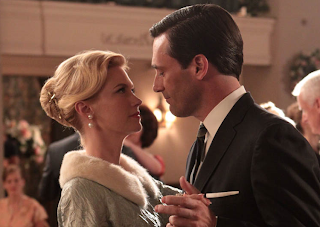 Don's biggest fear has now come true. Betty doesn't love him as Dick Whitman. She hates his lies and his infidelities. She hates being treated like one of the children as she cries for Kennedy, and most likely her marriage. "Take a pill and lie down" isn't what she wanted to hear. So, after her little "drive" to White Plains for her tete-a-tete with Henry, Betty came back and told Don what he didn't want to hear.

Mad Men resumes in two weeks with the season three finale "Shut the Door. Have a Seat". The show's season finales thus far have been pretty sensational. After these last two explosive weeks, there is no telling what Matt Weiner has in store to raise the stakes.
Posted by TVBlogster at 11:53 AM