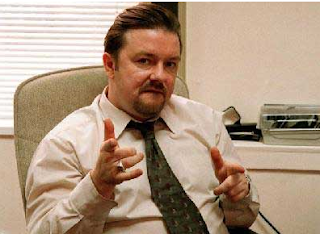 Here's an interesting turn up for the books. As per OfficeTally.com, NBC's The Office may be interested in bringing back a familiar face from the original British series. Showrunners Paul Lieberstein and Greg Daniels have been considering Ricky Gervais as a replacement for Steve Carell when he leaves the role of Michael Scott at the end of next season. Although Lieberstein mentioned to Vulture magazine Gervais not a top choice, the concept is "not a dead idea".

Sources: OfficeTally.com and New York Magazine
Posted by TVBlogster at 8:43 AM