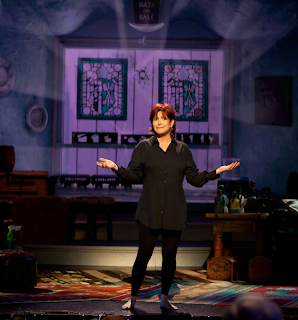 In other Fisher news (see below - although spelled differently), Star Wars legend Carrie Fisher has been enjoying a world wide tour of her one woman show Wishful Drinking. An autobiographical telling of her life, Fisher has been spilling it since 2006 when the original stage production began. It arrived on Broadway in 2009, and has just recently wrapped in Australia.

Now, it's been made into an HBO special. Taped in June before a live audience at the South Orange Performing Arts Center (SOPAC) in South Orange, NJ, Fisher dips into her famous family archives to laugh about her strange, wild ride as the daughter of Debbie Reynolds and Eddie Fisher - the Brad Pitt and Jennifer Aniston of their day, with the "home wrecking" Elizabeth Taylor representing today's Angelina Jolie. From Princess Leia, to George Lucas, to pills, sex, booze and manic depression to her life as a writer, Fisher exposes her issues with the same hilarity and brutally honest voice that's made her famous. (That - and Star Wars merchandising).

Having seen some previews, this really looks good. If you love a good yarn about crazy in Hollywood, check this out.

No Underwear in Space
Posted by TVBlogster at 5:22 PM