Steve Carell and NBC Continue To Do Business... 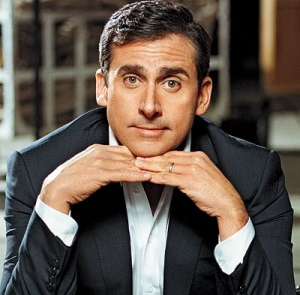 So, you thought Steve Carell's last season as Michael Scott would end his days on the small screen. After all, big time movie career beckons. It looks as though Carell's heart still remains at NBC. As announced by Deadline Hollywood yesterday, the soon-to-be former Michael Scott will be developing a new series for the Peacock. It will be a show based on his own true life experience as a mail carrier in a small Massachussets town. The working title is The Post-Graduation Project. It appears that Carell will not star, but could turn up in cameo roles, lending more of his time in writing scripts than being in front of the camera.

Speaking of The Office, Mindy Kaling appeared on Ellen earlier this week with a clip from the upcoming Christmas episode entitled "Classy Christmas". Looks like Holly Flax is back in Scranton, and a little pissed that her boyfriend AJ hasn't popped the question yet. This is good news on two fronts. 1) You know that conflict is going to bring Holly into the ever loving arms of Michael, making his exit a happily ever after one, and 2) You can't have Holly break it off with AJ without seeing AJ try to win her back. This means a Rob Huebel appearance is possible. Huebel cameos are always good.
Posted by TVBlogster at 3:21 PM