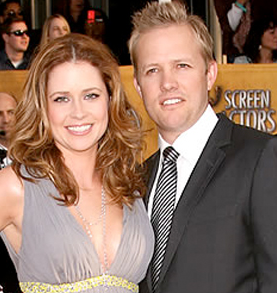 My favorite newlyweds are getting it done with a new project called The Giant Mechanical Man. As per Hollywood Reporter, Jenna Fischer is to co-produce and star in the romantic comedy, written by her husband Lee Kirk. Just added to the cast are Rich Sommer (Mad Men), Bob Odenkirk (Mr. Show, Breaking Bad and our favorite uncle of comedy) and Lucy Punch (Dinner for Schmucks). Topher Grace, Chris Messina and Malin Akerman are also on board.

Jenna will be featured as a zoo keeper torn between two love interests. With The Office winding down into a sitcom hum, kept alive by NBC programmers, it's terrific news to see the talented Fischer go beyond the walls of Dunder Mifflin and collaborate with Kirk to bring more smiles to theaters.
Posted by TVBlogster at 9:50 AM