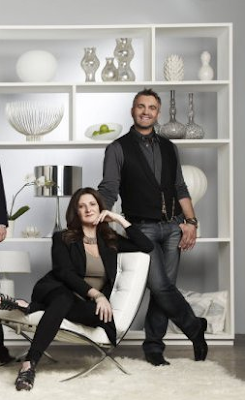 What is it with British people and Los Angeles? Is it the sunshine and big money that brings out what is already pretty terrific to levels of Absolutely Fabulous? Last week, Bravo premiered their latest reality series Million Dollar Decorators, and unleashed a pair of Brits that have given me new meaning in life. Kathryn Ireland and Martyn Lawrence-Bullard are interior designers to the Hollywood rich, and they take Edina Monsoon and Patsy Stone to the 'Fabulous' cleaners. They are the real deal in terms of fascinating personalities that you would sell a pair of Laboutins to spend time with. If you had a pair of Laboutins. I don't.

Delicious. That's Martyn's word, and it never feels so true as it does when you see him on this show. The words "Delicious" and "Sumptuous" fall from his lips like melted chocolate, a vision that is real since he is addicted to the stuff. He lives in this beyond gorgeous house in the Hollywood Hills that held Hollywood royalty such as Valentino and Gloria Swanson. William Faulkner was also a past owner who used to write his scripts on the secluded terrace overlooking a garden that is probably a slice out of Nirvana's backyard. Martyn is like Morrissey as designer, and when he meets up with Kathryn Ireland, the fabulousness begins.

Kathryn is this ballsy British broad with a "body they don't make anymore". She not only designs the home of wealthy folk, but she creates beautiful textiles. We haven't seen much of her at work yet, but it doesn't matter. She's a pip. While lunching with Martyn at a swank L.A. restaurant, she discusses openly, histrionically, he size of her boobs - which are grand. In episode one, she held a birthday party for herself that barely happened, but when it did, she was the belle of the ball, flirting with guests, trying on hats, playing various shades of ingenue, and exuding a flaky hilarious vibe. She's not only the 'life of the party" she is the life of this show. Part Dorothy Parker, part....Edina Monsoon, I can't wait to see what she brings to the table. And just from a quick dose of her and Martyn breaking bread and sucking on wine while talking about hypnotists, it's my hope Bravo will let us peek deeper into that friendship.

Also on the show are designers Mary McDonald, Jeffrey Allen Marks, and Nathan Turner, who all stand on their own as interesting characters. But for me, the Brits have it going on.

As a final note, it was reality show boner time when Kathryn and Martyn were dining at La Villa Blanca, owned by none other that that other wonderful Brit from Real Housewives of Beverly Hills - Lisa Vanderpump. An appearance from her last night would have been a trifecta of British/Hollywood beauty. But sadly, not this time.

The show airs on Tuesdays. Check out clips over at Bravo.
Posted by TVBlogster at 3:17 PM