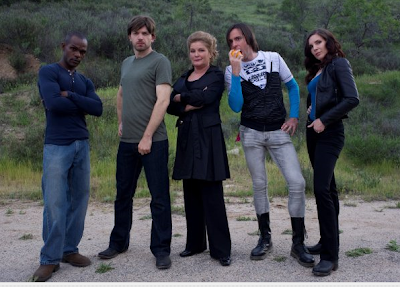 If you dwell around the CBS network during any given weekday night, you'll stumble across a litter of cop dramas that, in recent years, have multiplied like bunnies. CSI: Criminal Scene Investigation, CSI: NY, CSI: Miami, Criminal Minds, NCIS, and NCIS: Los Angeles. It's a veritable poo-poo platter of dead frat boys, gory autopsies, lady detectives in pant suits and acronyms. Yes, America: These are your prime time procedurals, and it's time for some spoofing to keep their heads on straight.

Much like Childrens Hospital, which is a send up of medical dramas like Grey's Anatomy, Adult Swim has taken an idea by comedian Paul Scheer and given the cop drama it's own hilarious punch in the gut. NTSF: SD: SUV originally aired as a spoof trailer after Childrens' last season, and was picked up by the network for full 15 minute episodes. It's currently in it's third week of broadcast, and has proven to be a pitch perfect procedural satire. Alongside Scheer as Trent, is June Raphael as Piper, Rebecca Romjin as the brainiac Jesse, whom everyone thinks is ugly but it gorgeous, Kate Mulligrew as Trent's ex-wife and commander Kove, Brandon Johnson as Alphonse (a UCB favorite of mine, who is incredibly funny and needs to be famous now), and Party Down's Martin Starr as Sam. There's a robot. There's sex. There's histrionics. And David Caruso's spirit lingers in the details.

NTSF:SD:SUV airs right after Childrens Hospital at 12:15am on Thursday nights. Watch it, and prepare your mind before it gets blown away.
Posted by TVBlogster at 5:11 PM

Email ThisBlogThis!Share to TwitterShare to FacebookShare to Pinterest
Labels: NTSF:SD:SUV