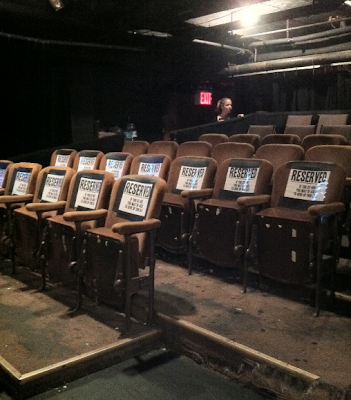 Hello from the Del Close Marathon Part 13. Yes, thirteen years of celebrating the unique, twisted talent of Improv guru Del Close over at the Upright Citizens Brigade Theatre in New York City. The event usually kicks off with a press conference with UCB founders Ian Roberts, Matt Walsh and Matt Besser , all on hand to discuss the future of the theatre, stories about Del, and to intermingle with press, comedy fans and students alike. Horatio Sanz joined them since he was there at the launch of the UCB, and to perhaps fill in Amy Poehler's absence.

Regarding UCB business, the topic of UCB East was broached. As you may remember from last year and various articles about the place, a new branch of the comedy theatre was (and is) due to open in Alphabet City on the Lower East Side earlier this year. Despite NYC building bureaucracy, and a pesky neighbor unhappy with the "Hot Chicks Room" signage outside, the UCB East (or UCBeast) is all decked out and ready for it's grand opening. Doors will open in early September and will be dedicated to stand up comedy - not strippers - as one vocal neighbor with her speed dial on 311 with complaints about it looking like a bordello proclaimed.

Also on the agenda was talk of a UCB book that will draw out improv techniques taught within the UCB training centers. Since the manuscript has been passed on to all instructors for input, it's been delayed. In addition, the UCB team has been trying to devise a chart to include in the book that breaks down the concept of "Yes, And...", which is the main component within the Harold "game" structure. Thanks to an artist in audience, who was kit out with markers and pens drawing the conference (like a court artist), Ian tried to draw the chart that deconstructs the "Yes, And..." vision, but he proved it difficult to harness on the printed page. With those factors swimming around, a UCB handbook might take some time to publish.

Of course, the man of the weekend, Del Close, was discussed. His difficult nature, his iconoclastic vision of comedy, and his own issues regarding contemporaries like Elaine May and Mike Nichols who moved onto the stratosphere of comedy success, while he stayed on the sidelines, was touched upon. Perhaps Del's own legacy was to bestow a method of "game" that would create the building blocks of organic, smart comedy as we know it today. With the theatre filled with UCB students and young performers from all the country, his resonance is perpetuated by Besser, Roberts, Poehler and Walsh, to the point where Del Close is more of a household name than May and Nichols to this new generation of funny people.

And speaking of new generation. Sadly, it feels like the original wave of UCB students who've grown through the years on the UCBNYC stage have moved on. The Los Angeles transplants were unable to make it due to production commitments. It's bittersweet. On one hand, it can feel as though they are turning their back to the past. On the other, it's like the seniors - the Scheers, Huebels, Poehler, Helms and the rest - have moved on to great careers, giving hope to the freshman with visions of pilot season and development deals in their heads. Still. It's a bummer they can't make it anymore.

Yet, the new class is moving up. Doppleganger - a lady threesome (Nicole Byer, Keisha Zollar and Sasheer Zamata) hit the stage after the conference. Comedy transcends race and gender, and in a world where Improv is dominated by white hipster dudes and chicks, Doppleganger's line up of three African American ladies was a refreshing force with a passionate flair. Using Harold techniques to transition from one funny, unique scene after the other, they are playful, hilarious, and heighten moments like crazy. They are a must see at UCBNYC or at various NYC venues on any given night. Doppleganger is proof that there are more fresh new faces on the rise, and talent with so much to offer. (And funny ladies rule!) 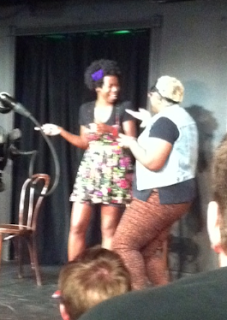 Posted by TVBlogster at 3:38 PM