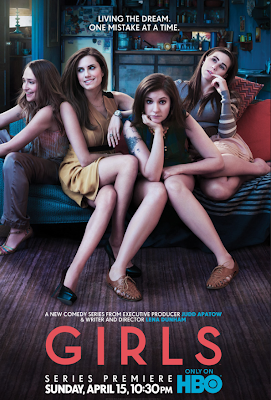 From the HBO press release:

"Hannah (Lena Dunham) is a unique mixture of self-entitlement and self-loathing.
She believes she has the talent to be a successful writer, but forgets she has to write first.
She wants to have a boyfriend without the obligations of a relationship, and a job without
having to work. Sheʼs ultimately good-natured, with a spirited sense of humor. But every
time Hannah is about to improve her circumstances, her cluelessness undercuts her."

Girls, premiering on HBO on April 15th, is the long awaited project from writer, performer Lena Dunham  I've heard her described as this young generation's Tina Fey; however, I'd like to think of Dunham as her own entity, definitive of her own style and humor which reflects her group of 20-somethings. I think this show is going to be fun. Besides, I saw Lena Dunham at UCBLA's show 'Mapping the Heavens with Rob Delaney and Dave Holmes". She was charming. I'm looking forward to this.

Also check out her indie feature Tiny Furniture in which she wrote, directed and starred. Check it out on Netflix streaming - but good luck in not having it rebuffer every two minutes. (Netflix, you are on my last raw nerve.)