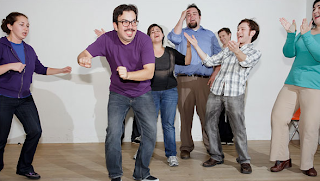 Over the years, The Upright Citizens Brigade has developed a talent pool for TV and film producers looking for new faces. Many an alumni have been plucked up for television and film. Jenny Slate (SNL), Bobby Moynihan (SNL), Donald Glover (Community) and Aubrey Plaza (Parks and Rec) are just a small example of UCB people who were performing at the theater as regulars recently as last year and have moved on to Hollywood projects; yet, they continue to be part of the UCB community.

I've just completed Improv 101 at Upright Citizens Brigade myself. It was not only a major blast to learn the basics of long form Improv (aka The Harold) created by Del Close, but it was a profound practice in trust, concentration and the weird, magic creation of scenes that are collectively produced, on the spot, by different imaginations. The result is usually hilarious, or not. But that's the beauty of the process. It's not a practice of telling jokes, but the job of working at "the top of your intelligence". You create a truthful situation, and humor can be produced organically as each member of a team builds and heightens a scene to bizarre levels.

UCB's training center devotes itself to perpetuating Close's teachings in a comfortable, non-intimidating way. It has been my refuge from the drugeries of life, and I can't wait to continue to the next level of work. In fact, I plan on going as far as a can in the UCB firmament. Who knows? And that's the beauty of it.

Some of the UCB trainees who could be the next familiar face on television were featured in NYTimes this weekend. No, I'm not one of them (I guess they weren't there the days I was slamming against walls at the Training Center.) Still...it's a nice display of people holding the Improv flame: Clown College, The Manhattan College.

Here are some videos of UCB performances like Asssscat and MySpace (now Facebook) that have inspired me to sign up for training. The videos might not load up on this site using Firefox. If they don't, just click on the titles to go to original site. Or - to watch more UCB comedy, go over to www.ucbcomedy.com

Posted by TVBlogster at 8:45 PM