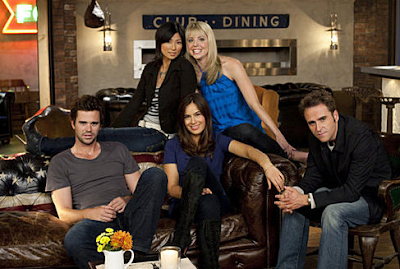 It feels like NBC is trying to stifle the progression of the comedy sitcom by going back in time to the land of Friends. Fun and carefree pretty 20-somethings let their libidos loose in fun, sexy New York City where huge apartments are a plenty for little money and the life is so complicated and weepy. Goodbye creative television comedy. Hello canned laugh tracks, poorly executed performance and boring characters.

Perhaps co-star, creator and writer Christopher Moynihan's script read well. After all, the premise has charm on paper: A young single woman named Charlotte Payne can't find the right man, so she goes to a dating service (not online - a real dating agency with chairs and desks) where she is asked 100 questions about what she's looking for in a man. This invokes various stories about her dating and experience with relationships. Great! Could make up for some interesting stories about a modern girl (yawn) looking for love. This may have worked ok in the read through, but in last night's pilot, the premise fleshed out by humans didn't work.

Sophie Winklemen is serviceable as Charlotte, but a bit...annoying. This pains me to admit. I adore her in BBC's The Peep Show where she's funny and perfect in the role of Big Suze. However, her performance in Questions in the pilot was straining. She tried too hard to impress us with Charlotte, and that is a turn off for viewers who need to slowly cotton to her character by finding that vibe of empathy to which we can relate so we can like her and want to come back to cheer her on.

The storyline itself is formulaic. The supporting characters are foisted upon us like a bunch of sorority sisters who want to be bestest friends in the first five minutes of knowing you. There is no slow lead up to who these individuals are or what they are about. They are mouths that spew one verbal zinger after another - one joke every ten seconds, blinding us from getting a whiff of their true nature. Meanwhile, a very obvious chorus of canned laughter plugs in the quiet space left open by unfunny dialogue. Am I supposed to relate or like these friends of hers as they watch her turn down a marriage proposal at Yankee Stadium? I do know that one friend was disowned by his billionaire father. Ok. Why? He didn't seem like a douchebag. Time will tell, and it better tell us quickly because the 13 episodes ordered by the network was reduced to 6.

Sandwiched in between the summer re-runs of Community and 30 Rock with little fanfare, it slipped through like a mistake made by a newbie techie at NBC's Broadcast Operations Control, if that department still exists.

I don't mean to pick on a show that might not make it. What infuriates me as a comedy fan is that after the Conan fiasco and the dumbing down of The Office in recent years, this is what NBC give the audience?

100 Questions' only question should be...why? And if there is a why, a little exposition, funnier dialogue and less fake laughing last night would have given us a better answer.

Here's another version of the pilot seen last night. I guess they did some retooling because last night's episode aired with a slightly different cast than seen here:

Posted by TVBlogster at 7:14 AM