Six Seasons of Not Watching 'Lost': A Clueless Person's Guide to the Last 10 Minutes of the Finale 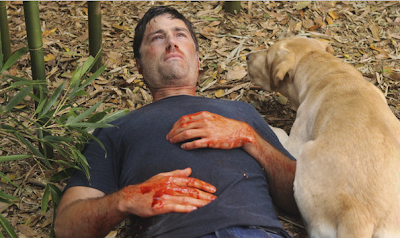 The series finale of Lost was famously on last night on ABC. I have not watched one flicker of film this show has produced. It's a promise that the five seasons I currently have on my Netflix "Watch Now" list will be viewed; however, I couldn't resist gazing at the last ten minutes. As someone who had just spent one hour witnessing Walter and Jesse chase a fly around their meth lab on AMC's Breaking Bad, I needed to find some excitement. Tuning into those last moments on Lost, anxiously awaited by Lindelof and Cuse fans everywhere, was satisfying yet weird. Years of angst and mystery, constant analysis and in depth discourse on each storyline was bypassed by me. Let's just cut to the chase, I say. The problem is - I didn't know what the hell I was watching.

There was a handsome guy in a tee and jeans bloodied and crying. Suddenly, he was dressed up and in a cathedral someplace else. All his old plane crash friends were in this Unitarian type church saying hello to each other. I presume they were all dead. The handsome guy and his father were talking about how this place is what they all wanted it to be. Cut to the same handsome guy, this time in a tee and jeans bleeding and dieing in a parallel world in the woods. He collapses. A cute dog runs toward him, lays beside him as he he dies. This made me cry. Seriously. I'm a sucker for a dog. Bloodied version of handsome guy in woods in laying on the ground, looking up. He sees a plane. He smiles. Handsome cathedral version of the guy in church, gorgeous lady who is obviously his chick because, geez, look at her, she gorgeous. White light...dreamy music. Bloodied guy. Cute dog by his side. And scene.

I have no idea what happened. But I wept.
Posted by TVBlogster at 1:12 PM

Email ThisBlogThis!Share to TwitterShare to FacebookShare to Pinterest
Labels: Lost