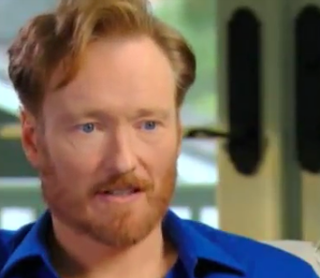 Here are some thoughts about Conan O'Brien's '60 Minutes' Interview last night. I originally posted this on Gawker today with some modifications here. Nothing very surprising coming from a comedy fan and blogger who sides with O'Brien 100%, but...just my two cents.

Despite all the drama he's been through, I see Conan as the winner in all this. I also saw Letterman as the winner in the late night debacle back in 1993. NBC's vision of 11:30pm Late Night is middle of the road comedy that appeals to the masses and brings in the cash. It's the Easy Listening music of comedy. Carson handled it with class, style and pure brilliance. Leno pretty much made it like a big circus. If you like that. Great.

Letterman moved on with a better deal at CBS, and Conan is doing the same with TBS. Leno is left with a creaky show filled with hacky material that will never take comedy to a new level, nor challenge the audience's imagination. It's safe. It brings in numbers. It helps business. There is no soul to the humor, but the people who like his comedy and like the host don't care about soul. They just want to see that nice Jay Leno before they drink their cocoa and shut out the lights.

There is a part of me that wonders why Conan did this interview. He's brave to do it, and to me, he comes off as the classy man he is. But it stirs up all the naysayers who don't get it. The people who lament his millions and lay blame on him for his own misfortune. Yet, the fact Leno never lifted a finger to placate the matter, nor ever called Conan speaks loads about the guy. The fact Conan wishes his opponents well (despite jokingly taking it back), also speaks volumes of his own character. I also believe things happen for a reason. Conan's bumpy road will likely lead him to a creatively righteous place; whereas Jay's redux of The Tonight Show allows him to maintain his stagnant humor within boundaries placed by advertisers, executives and people who don't want to think when they laugh.

Conan was amazing last night. Yet, it's obvious the pain is etched on his face. He's not a broken man. He's a changed man. Thanks to his integrity, he'll emerge better than Leno ever will.
Posted by TVBlogster at 8:30 AM