What I'm Watching on Fox this Fall 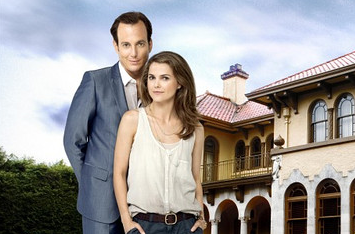 Can you imagine if Will Arnett's show Running Wilde ends up pitted against wife Amy Poehler's Parks and Recreation on Thursdays? That's my feverish nightmare. But, luckily, the network programming overlords wouldn't dare. The new single camera Fox comedy will be on Tuesdays at 9:30pm, while the wonderful Parks and Rec will remain on NBC Thursdays - sadly beginning mid-season.

Wilde stars Arnett and Keri Russell in a story about a wealthy bastard and a poor altruisitic single mom who deplores the excesses of the rich. The knew each other years before. Now they are grown up. He likes her, she hates him. Mix with water and stir. I'm not being snarky. I want this show to work, but the description is a bit formulaic. The trailer makes it look like a sappy romantic comedy, but I feel this has promise. Arnett could make a Tupperware party fun.

Fox is the network that brings you animation comedy galore. Sunday nights will be filled with The Simpsons, American Dad, The Cleveland Show and Family Guy. I'm not much of an animation fan; however, come mid-season Bob's Burgers will be on the slate, and I can't wait. Voiced by Jon Benjamin, Eugene Mirman and Kristin Schaal just to name a few, this comedy cartoon is a comedy fan's happy dream.

Posted by TVBlogster at 1:50 PM