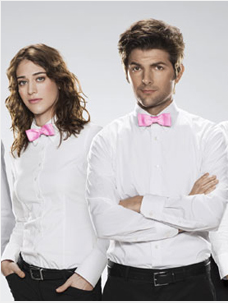 Party Down fans will love this! Adam Scott and Lizzy Caplan have been cast in an indie feature from Sanchez Productions called The Bachelorette. It will focus on a group of old high school friends who get together for the wedding of a friend. Will Farrell and Adam McKay will produce. Kirsten Dunst and Casey Wilson are also attached to the project.

I am still traumatized by the cancellation of Party Down. It got to the point that when I recently moved and ordered cable, I refused to include the Starz channel on my package. The joke's on them: Cult status on the show is growing, and the idea of a Party Down movie has been mentioned by various cast members.

Until that elusive and mythical feature is created, we can enjoy Caplan and Scott's cool chemistry under the hands of McKay and Farrell. Since Adam will be playing Lizzy's former high school crush, perhaps those hilarious sparks will fly.

Sources: Vulture, Hollywood Reporter
Posted by TVBlogster at 10:27 AM