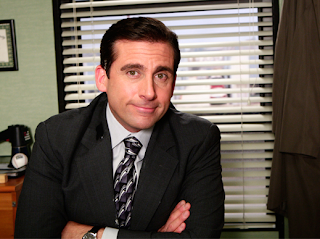 This is going to be hard. Yes. That's what she said.

Tonight we bid farewell to Michael Gary Scott: top salesman, screenwriter, improv performer, and raconteur. He leaves behind one idiot - Dwight Kurt Schrute, one former man crush - Ryan Howard, and Toby Flenderson - the worst person in the whole world. As he sails to Colorado in his ship named Holly Flax, we'll always remember his words of wisdom, his jokes and his childish tantrums.

Thank you Michael Scott. Whenever I hear the word "Boobs", I'll think of you.

Here's a tribute to Steve Carell and his amazing seven seasons on The Office. Via TV Squad.

A "supersized" episode of The Office will air tonight at 9pm et on NBC.
Posted by TVBlogster at 4:14 PM