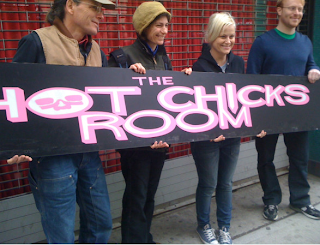 The future Upright Citizens Brigade Theatre on New York's lower east side has created a stir. The new branch of the famous improv comedy space, aka UCBeast, will offer more stand up, and will sport a bar. The thing is - the signage for the drinking hole, called "The Hot Chicks Room", was placed outside for all to see. Residents of the East Village area, who once had to fend off drug dealers and strip clubs, were not too pleased. They wanted the neighborhood to remain a 'no hot chicks zone'.

No harm was meant, and no naked girls were to be employed. The moniker was based on a UCB in-joke, a joke the neighbors were not in on. No wonder confusion ensued and complaints were made. However...no worries!

The kind folks at UCB complied with the grumbles, and with co-founder Amy Poehler on hand, the sign, originally turned over not to offend, officially went down this week. Where will it go? To an actual chicken farm on Governors Island that's part of NYC's Green initiative called Earth Matter. The sign will be placed on a greenhouse where chicks are raised in a hot, yet comfortable environment. They also encourage visitors (field trip!) to come and learn how the little critters thrive in a green ecosphere. What a perfect ending. Happy Friday!

Here's an article about if from one of my favorite NYTimes reporters, Dave Itzkoff.