Flight of the Conchords - No More on HBO 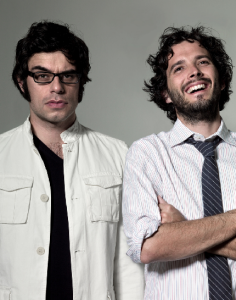 That's right, Bret, laugh away. You've only broken my weary heart. Jemaine Clement and Bret McKenzie have announced that they will not pursue a season three of their beloved HBO series Flight of the Conchords. Fine. Okay, be that way. But don't think I'm going to come running back to you when you decide to woo me back with an HBO one off special. I'll be with another show.

Well, I'm kidding, of course; however, I'm sure the Flight of the Conchord fan contingency is feeling a wee bit similar to this sentiment. Of course I'd love to see more seasons, but it's smart to let it end when it did. The program showed how the ficitional version of Bret and Jemaine tried to make it in America; yet, it was a rough ride with no record deals nor fans nor money in sight. The season (now series) finale had the boys broke and so behind in rent, that even the lovable landlord Eugene couldn't let them stay. A musical on their lives, created to produce some money, sucked hilariously and snagged the attention of the INS, who noticed their visas expired. The last scene of the final episode revealed they were back in New Zealand, making their own brand of rhythm off fences and sheep. Even Murray was riding the tractors, smiling and singing away all the weight of trying and failing to make the boys famous. It was obvious they were back where they belong. Mel had a nice ending too. She reclaimed her marriage mojo with her sweet and always suffering hubby Doug. It was a perfect ending to a second season, indicating that the guys were most likely going to leave it there.

Just like Ricky Gervais did with his own The Office, sometimes you just have to know when a show should end before the quality wanes. Another season of Bret and Jemaine forcing more story lines and writing songs (two very difficult things to do and do well), would have diluted the excellence they've maintained in two jammed packed seasons. After all, how long can a starving band from New Zealand last in New York City with all these odds against them? How long can Mel cling to her ideal vision of these boys as gods and ignore her husband? It shows McKenzie and Clement's integrity to respect the work enough to not be persuaded by the big bucks of Hollywood and beat a good thing to death all for the love of fame.

Yep. I'm at peace with this decision. Besides, we will always have the DVDs and the music.

Source: NYTimes Arts Beat
Posted by TVBlogster at 6:01 AM