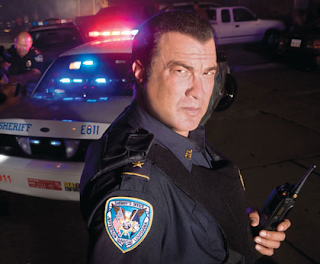 I cannot come down from my high. A&E premiered Steven Seagal: Lawman last night, and it was glorious. GLORIOUS. Seagal, as it turns out, is not only a really bad actor who appeared in action films that exploited his laborious martial arts moves, but he's been the Deputy Sheriff of Jefferson Parish, Louisiana for the past 20 years without telling us! Surprises are fun!

We lucky viewers are brought on a journey with Seagal as he and his cop partners prowl the bad ass neighborhoods using his knowledge of zen archery, spiritualism and all forms of karate to apprehend the scuzz balls of the streets. He comes with pointers on preparedness for seeking out bad guys, the kind of lessons one can learn by watching the films Shaft, Kung Fu or a Starsky and Hutch episode. He educates the mostly overweight cops of this parish by instilling the same neck holds and flips Tiger Schulman classrooms teach 4th graders everyday. He's a master marksman who preps a failing cop to hold a gun properly, to which the goofy officer gaffaws and awww schucks Steven with gratitude. This humility pleases the master. It pleases him very much.

There's a whole cast of star struck characters who enter and join the admiration for Seagal. The drunk lady who spilled out of a bar to hail the police (yes...like a cab) loved him. Even the yappy guy she complained about, who was three sheets to the wind and creeping everyone out, was mesmerized. His face was pixelated to protect his identity, but you could tell. Everyone was flipping wigs over Seagal and the surrealism of it all.

However, the one person who loves Steven the most is Steven. His ego is as bloated as his body. His lack of self awareness is as limited as his sluggish, whale-like moves. Yeah, he can shoot the tip off a match or a Q-Tip, but he's not sharp enough to know that he comes off, not as the master of martial arts and mind power, but as a self centered never-was with an ego bigger than Louisiana itself. Sad, because Buddists don't believe in ego and meditate to avoid this behavior. But so what? If he doesn't care, why should we?

As Seagal himself has said, this show is not a joke, which makes it hilarious.

Alan Sipenwall of The Star Ledger wrote a great review about this show and the ego known at Seagal.

Posted by TVBlogster at 6:25 AM