Ronna and Beverly: Watch This Show, Or Feel the Wrath of Jewish Guilt. 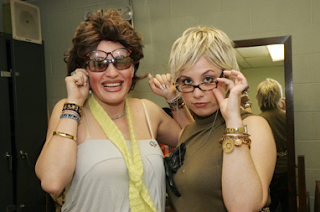 I'm a little late for this but I don't care.

Listen to me. You have to watch Ronna and Beverly on Showtime or online or else I'm going to go all meshugenah up in here. These two broads from Boston are the Semitic Ab Fab. They are hilarious, obnoxious and incredibly Jewy.

Ronna and Beverly were created and performed by Jamie Denbo and Jessica Chaffin, who bring these polished Hebrew dames to the stages at UCB-NY and UCB-LA, much to the happiness of loving audiences whose word of mouth created a buzz.

After cultivating a fan base, Denbo and Chaffin decided to pitch their show as a television series. Showtime gave them a shot to produce a pilot, but didn't have much interest, until one day the powers that be decided to air the episode, which it did - this past Monday night. (I know! I told you I was late. Check listings. It's bound to be repeated.) Paul Feig (Freaks and Geeks, The Office) directed the episode.

There is plenty of online chatter about this show because comedy nerds like me want to see it picked up for series. So please - if anyone is reading this - please watch Ronna and Beverly on Showtime. Even if you've missed it, go to their site and watch their videos, then write about it, call Showtime - anything.

Look! Even Jon Hamm visits them! How great is that? 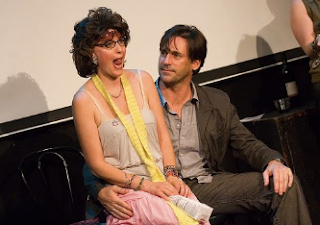 Now you have to watch this show.

Here is some online reviews:

The Comic's Comic: Showtime Gives Ronna and Beverly a Shot At Midnight (Sean McCarthy)
Posted by TVBlogster at 7:53 AM

Email ThisBlogThis!Share to TwitterShare to FacebookShare to Pinterest
Labels: Ronna and Beverly