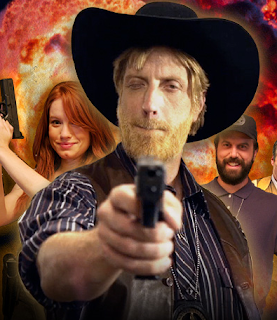 On a television night filled with The Office, 30 Rock, Parks and Rec and Big Bang Theory, it might be hard to stay up late to squeeze in a 15 minute comedy over on Adult Swim. However, it might be worth it, even if your DVR explodes while trying.

From the comedy laboratory of Executive Producer Conan O'Brien and his team of comedy brainiacs at Conaco Productions (Jason Woliner and Eric Appel both of 'Human Giant' in the mix), comes a brand new show whose praise should have been sung on this blog about a week ago when it premiered on February 3rd.

Chris Elliot is Marshal Chris Monsanto, a gun slinging man of the law. A few moments in, and you get a whiff of the Texas Walker Ranger parody that is Eagleheart. As Conan fans know, the Chuck Norris action adventure series was a favorite on his 'Late Night' show, so for alternative comedy connoisseurs, it's familiar ground.

Co-Starring as his law abiding pals are Brett Gelman (One Thousand Cats), Marsha Thayer (Forgetting Sarah Marshall) and Michael Gladis (Mad Men), who looks more like Orson Wells in this role than ever before.

Eagleheart airs on AdultSwim on Thursdays at midnight. Watch the hell out of it.

Email ThisBlogThis!Share to TwitterShare to FacebookShare to Pinterest
Labels: Eagleheart