The Real Housewives of Beverly Hills 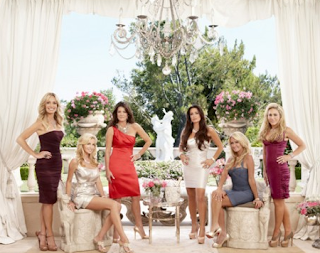 Reality shows are rarely covered on this blog. However, there is a mushy spot open for the Housewives franchise on Bravo. The Housewives of New Jersey was a favorite. With hilarity culled from garish classlessness and dumb drama from the land of Soprano. But never has a Housewives series captivated me more than the sparkling, Restlin and Botox'd wonder that is the ladies of Beverly Hills. These wives are the real deal. They are the ground zero of extravagance, with the air of nothing better to do than participate in charity work and let petty arguments fester without breaking a nail or missing a facial appointment.

Housewives of Orange County? Camille Grammer has your "Housewives of the O.C". right here, baby, with her creepy famous husband and the evil psychic "side kick" Alison Dubois sucking her electronic cigarette, predicting when you're going to die. Taylor Armstrong's lantern jaw and trout pout quivering under the weight of her bad marriage will creep you out, while child stars/sisters Kyle and Kim Richards cry, hug, hate and let their family issues fester in fist fights in the backs of limos. It doesn't get better than that.

The show has already ended, but Bravo, in all their wisdom, has kept a few juicy clips off to the side for primetime specials, such as last week's "Lost Footage" episode, where we saw more into the troubles of horrible Camille Grammer, got more background from Lisa Vanderpump and her husband Ken on their acrimonious split with long time house guest Cedric aka The Human Tick, and sisters Kim and Kyle tried to make up from a devastating fight with subtext hinting at more family troubles than we'll ever know.

Last night, Bravo gave us extra footage of the aforementioned episode "Dinner Party from Hell". Camille spews her scorpion venom all over her dinner table as the poisonous Dubois drinks martinis fixed in a glass big enough to house a D-cup boob. This episode had everyone - viewers, bloggers, Gawker commenters - up in arms the day after it originally aired. It was insanity, definite fodder to feed into the guilty pleasure mill.

Posted by TVBlogster at 2:53 PM

Email ThisBlogThis!Share to TwitterShare to FacebookShare to Pinterest
Labels: The Real Housewives of Beverly Hills