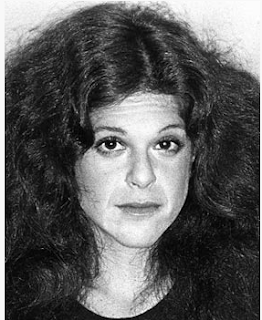 Her voice just came back into my head:

Have you ever seen a UFO?

Do you believe we are not alone?

Well, Mr. Feder, you ask a lot of stupid questions from someone from New Jersey..."

When I was in the 7th Grade, I'd make my friends at the cafeteria lunch table laugh at my impression of the frizzy haired, painfully frank and funny Rosanne Rosanna Danna. She was a creation of my hero Gilda Radner, whose ability to conjure that sweet wonder of a child in her characters captivated the child I was at the time, as well as millions of comedy fans around the world.

Back during the original cast of SNL, before a VCR entered my house, I'd use a tape recorder to audio record sketches off our old television set. (The TV looked like furniture. My father refused hung on to it for years, claiming, "I saw Neil Armstrong walk on the moon on that tube!") On Sunday mornings after a live SNL broadcast, I'd listen to those comedy gems and memorize them, much in the same way one memorizes a song. The sketches that still resonate in my brain are the Gilda's characters: Rosanne, Judy Miller, Lisa Loopner.

"Off to the side of the road, I saw he worlds biggest buttocks!

Two big cheeks dancing all over the expressway!

There it was! In living color...a rectal eclipse!

I thought I was gonna die!"

In 1979, when Gilda was riding high from her popularity on SNL, she took her bag of funny creations to the Winter Garden Theater on Broadway in her show, Gilda Live!. Produced by Lorne Michaels and cast with familiar SNL faces such as musical director Paul Schaffer and comedian Don Novello, it had a successful run, and was filmed as an HBO special that aired the following year.

Here's a clip from the Broadway show:

Gilda's fight against Ovarian Cancer is well documented, especially in her book, It's Always Something. In her incredibly brave fight against the disease, she helped launch Gilda's Club, a place for people fighting the illness to congregate, find solace and to live life. (Visit http://www.gildasclub.org/)

'Gilda Live' is immortalized on DVD for everyone to love today on Netflix., or to purchase on Amazon.