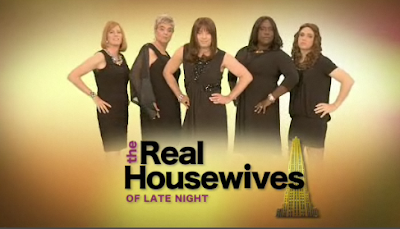 If 2011 could end right now, I'd be fine. My biggest television wish for the new year has come true. The Real Housewives of Late Night premieres tonight on Fallon, and I can hardly wait to see what is going to go down. Will Yvonne and Denise make up? Or will they come to blows in the biggest wig fight television has ever seen? This is going to be better than "Dinner from Hell" from Bravo's Beverly Hills show. The only thing that could put this over the top is if the fabulous Lisa Vanderpump made a cameo with the Gig-ster.

EW.com just twitted their exclusive sneak peek at tonight's "episode" which is so new, I can't embed it . Check it out here!
Posted by TVBlogster at 2:53 PM

Email ThisBlogThis!Share to TwitterShare to FacebookShare to Pinterest
Labels: Late Night with Jimmy Fallon, The Real Housewives of Late Night