Parks and Recreation on Cover of 'Entertainment Weekly' 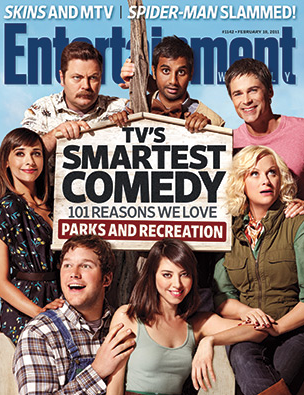 Question: Why is Adam Scott NOT on the cover of this issue? 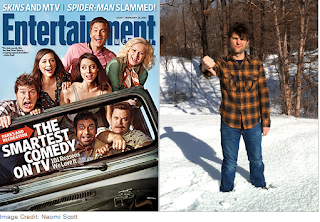 "Being a lifelong New Yorker (I grew up in Northern California and live in Los Angeles), when Entertainment Weekly called and begged me to be on the cover of their magazine (the show I’m on, Parks and Rec, was going to be on the cover, and thus I would ride its coattails) and that the shoot would be anywhere but Manhattan, I, of course, said no (yes).

To even consider leaving my fair city (I’ve never lived here) makes me literally vomit (not literally, actually not at all). So the decision was easy: I’d triumphantly stay in New York (I’m working on a movie here, and due to a giant storm, all flights were cancelled) while my fellow castmates mug it up in EW (I’m a subscriber). Victory (devastation)!!!

If you hate (love!!!) Parks and Recreation as much as I do, and are truly pissed (thrilled!) that Adam Scott joined the cast (Best Casting Ever! I miss 'Party Down'!), then don't (DO!) read more over at EW.com. (not 'People').

Posted by TVBlogster at 4:55 PM

Email ThisBlogThis!Share to TwitterShare to FacebookShare to Pinterest
Labels: Parks and Recreation