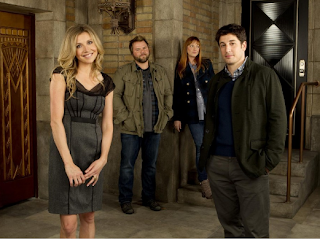 Mad Love feels like the kind of show a network puts on when they've run out of ideas. However, the cast is fine. Sarah Chalke looks great in this role, playing Kate, the love interest of Ben, portrayed by Jason Biggs. Judy Greer and Tyler Labine are pretty cute as a bickering duo who will undoubtedly fall in love with each other. The pilot felt mired by contrivances: boy meets girl, love at first sight, tired Empire State Building romantic meet up, men are jerks, or no they're not. Also, I don't see any real chemistry between Chalke and Biggs. Yes, she looks at him longingly with the sparkle in her eyes, but the undertow of attraction just isn't there. I don't feel it, nor do I believe they are characters in love.

I don't like being hard on a pilot episode. They are usually sketchy. They introduce us to the characters and the situation of their lives. The storyline is an idea that needs to grow on the viewer so we care and come back for more.

I'll give Mad Love a chance. Besides, with Two and a Half Men down four episodes due to Sheen's absence, CBS will need all the shows they can get their hands on right now.
Posted by TVBlogster at 9:41 AM

Email ThisBlogThis!Share to TwitterShare to FacebookShare to Pinterest
Labels: CBS, How I Met Your Mother, Mad Love