If Schmidt is Too Old, I'm a Mummy: Some Thoughts 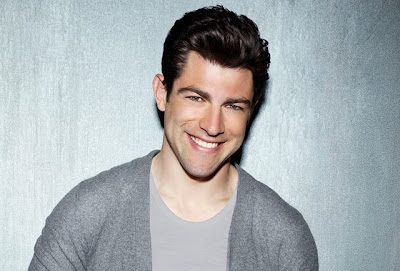 On this week's New Girl, ("Neighbors") our cuddly roomies welcomed a new cuddly group of dead-eyed millennials who moved in across the hall. Forever the bubbly girl who loves twee things, Jesse took a liking to these knitted capped trust fund bunnies as they twee'd through childish games with enough ironic detachment to make a philosopher cry into his paperwork on Kant. With her pretty hair and cute shorts, Jess' ability to charm the tattoos off these amoebas was due to her skills as a Kindergarten teacher. With their uncooked brains, Jess' imagination and whimsey won them over. They'd beg her to stay for all night hooplahoop parties and games of coy-ish charm. For all the cuteness we as viewers love in Jess, her big eyed ability to go with the flow was the big winner amongst these kids who've never heard of Saved By the Bell. (Where those kids THAT young or just out of touch?) 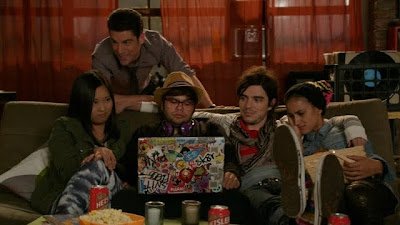 Meanwhile, our lovable douche bag Schmidt, in his peak of fitness and youth, was not loved by these squirming sperm mutations. But to be fair, Schmidt has the propensity to come off as a narcissistic metrosexual whose shallowness makes him say the dumbest things. But we love him for it - because the writers of this show have allowed us to see the sweeter side of him, the big heart he has for his friends, and his love for CeCe. (Or maybe it's just lust right now. His broken penis may have messed up that relationship for a while). While hanging out with these newbies to the building, Schmidt not only tried too hard to be hip, he succeeded at becoming that annoying uncle who thought he was so cool, but came off as the biggest nerd in the universe. And by "nerd", I mean geek, and by "geek" - I'm talking about old school loser, wedgies at your locker, buck toothed and smells like chicken soup.

So while these children of the 2000's looked at the viral, handsome GQ worthy Schmidt as an old fart they wouldn't allow to play drunken hopscotch with at two in the morning, I began to feel as old a Methuselah. Old. Old. Old. Because if the thirty year old Schmidt is an farty old bugger to these dust heads, then I'm dead and buried in a sarcophagus ready to be dug up any day now.

Oh and Nick? He's the oldest 30 year old man whose ever walked the earth. He's a "get the fuck off my lawn!" kind of old. A shuffle around in your apartment in worn slippers old. He spent most of his time in this episode pranking Schmidt in ways that would impress Jim Halpert. Nick's the best. He makes those of us older than him feel young.