'Magical Mystery Tour' Out On BluRay 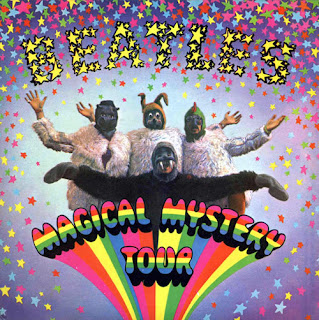 Once upon a time, in the land of Beatles, there lived a man named Paul McCartney. He and his three very cute, charismatic and talented friends wrote terrific music, wore amazing clothes, took the best, most mind expanding drugs and helped change the world from black and white to color. This man named Paul came up with an idea for a film. It would be weird, avant guard, most likely concocted out of a fevered LSD trip where everyone would go off on a bus and have a magical time.

The result - Magical Mystery Tour, which premiered on BBC1 on Boxing Day 1967. It was the closest The Beatles ever came to a flop. The critics hated it, and it left their fans confused. However, don't despair. This "flop" had some of the most terrific, iconic songs ever. "I am the Walrus", "Strawberry Fields Forever", "All You Need is Love", "Fool on the Hill" - we should all fail with such beauty.

The film is a curiosity no matter what you may think of it. The boys were just coming off the success of Sgt. Pepper's Lonely Hearts Club Band, and probably felt they had more juice left in the engine to break down a few more walls.  It's a confusing, mind boggling bad film, but as far as I'm concerned, any time spent with the Beatles is time well spent. Period.

Magical Mystery Tour is out on BluRay for your eyes to enjoy. It comes complete with extras, such as deleted scenes and commentary by Macca himself.  The Collector's Edition offers some other goodies such as a 60 page booklet, both BluRay and DVD discs and the album on vinyl.

And here's one of my favorite performances off the promotion of this flick. When the Beatles stopped touring and spent all their time in the studio, they would use the medium of video/film to continue to perform for an audience without actually having to travel. They would periodically send a music video of their latest songs to their old friend Ed Sullivan, who would show them on his show.

It's possible the official video of "Hello Goodbye" was edited to contain the original video in color. Since Ed Sullivan's show was still in black and white at the time, it's likely this colorful, joyful song was as black and white as Ed is at the end of the clip.

Posted by TVBlogster at 4:41 PM

Email ThisBlogThis!Share to TwitterShare to FacebookShare to Pinterest
Labels: The Beatles