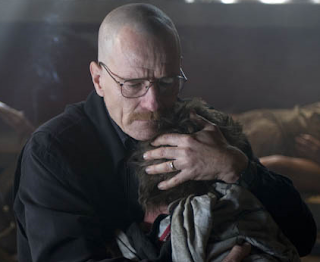 The season finale of season two's Breaking Bad ended in a shower of damnation upon the head of Walter White. His life defining decision in season one spiraled into a chain link of cause and effect, how one life's action can kick start the ruination of another - one by one. I won't deny that I felt a twinge of disappointment as I put two and two together: Jane's father's catatonic grief, his need to return to work to get his mind off his sorrow, the fact his line of work was in air traffic control - all season wide flash forwards suddenly came to light, and I knew what the horrific scene at the White house was - not a drug cartell destruction with his family members left dead and he on the lamb, but a mid-air collision.

The metaphorical implications did not escape me, and have resonated well enough to make me hungry for season three. The fall out will be beauteous. Skylar, not fully aware of his dealings, is now wise to her husband. Their estrangement will hopefully send brother-in-law DEA official Hank lose on his trail. As for Jesse, that beautiful fucked up warm hearted idiot kid - his soul must be gutted after losing Jane. Perhaps he's cleansed now. Perhaps there's some redemption for Jesse after his stay in rehab, with memories of heroine addicted beloved dead beside him. Either way, Jesse Pinkman is one of the most compelling characters on television. Aaron Paul spent a remarkable season two fleshing out his character's struggle, humanity and fear. You can't help but weep for this wayward soul. It's definite. Paul deserves an Emmy alongside Bryan Cranston.

Viewers are actually pissed at the outcome of last night's finale. I say, come on, it's not like they all woke up from suspended animation on a flight to Mars in 2035, and the protagonist you thought was part of your world in 2009, the guy you cheered to come back to us from 1973, was really just a future guy having a bad space flight dream due to a meteor shower. When Walter and Jesse wake up in a spacesuit on a mission to a inter galactic planet, then I'll be pissed. This outcome was fine.
Posted by TVBlogster at 6:27 AM