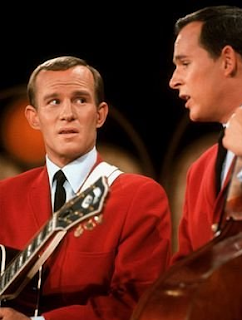 The Smothers Brothers Comedy Hour aired from 1967 through 1969. It was infused with folk songs and funny social commentary that stimulated controversy and bent boundaries of television entertainment. The show would feature comedians such as George Carlin, bands such as The Doors. The writing team included a very young Steve Martin, Don Novello and Rob Reiner, to name a few - talent that would soar in their own careers.

Tommy did find his baggage, and walked happily away. Nice soul he seemed to be.

I don't remember the show itself, since it goes way beyond my memory bank, but it's pretty cool to see how the cultural revolution of the hippy sixties was reflected in the satire of two straight laced white guys who could visually be mistaken for the establishment of the day.

You can check out The Smothers Brothers Comedy Hour here.

In other news, Mark Linn Baker is on my plane . The last time I saw him he was being tackled by Jason O'Mara, also on an airplane, in Life on Mars. He's behind me. Hope he doesn't see me post this, but hello Perfect Strangers opening theme.

Posted by TVBlogster at 2:35 PM