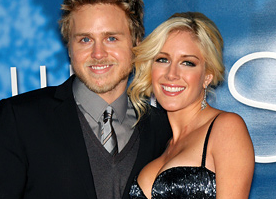 While the Lakers championship riots are dieing down here in L.A., back home in New York, another form of asshat has overtaken my fair city: The Hills' Heidi and Spencer, now failed stars of I Think I'm a Celebrity, But I'm Not. Now Get Me Out Of Here have been cab hopping from The Today Show (where Al Roker pissed them off) to The View (and God knows where else) to promote the fact they are sell outs who have no talent. Or maybe it's damage control for having quit the reality show that proves End of Days are near. What further damage can two fame whores quell? Their so-called careers are based on selfish, petty horribleness that's damaging to human intelligence.

I'm back home in New York tomorrow. Those two better be gone-zo.
Posted by TVBlogster at 10:56 AM