The Hangover, Nurse Jackie and Weeds 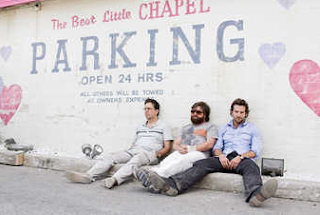 Crossing over into theatrical territory, The Hangover, starring The Office's Ed Helms, comedian Zach Galifianakis, and actor Bradley Cooper, had a great weekend at the box office, pulling in $43.4 million, coming in second to the huge hit Up.* (Source: Variety) This flick is definitely on my "to do" list. Also, check out Galifianakis' live performance at San Francisco's Purple Onion on DVD. It's also streaming on Netflix. Zach is insanely unique and oozes comedy brilliance. (Maybe "ooze" isn't the right word.)

*Update: Late weekend numbers are officially in and The Hangover overtook Up in Box office intake with $45million +. (Source: Variety) 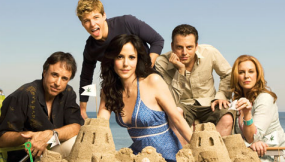 Season five of Weeds premieres tonight at 10pm ET/PT on Showtime. Nancy Botwin is knocked up with a drug lord's baby, Uncle Andy has warm and fuzzy feelings toward his sister-in-law, and Celia is such a bitch they practically thank her kidnappers for abducting her. Sadly, this show lost me a long time ago on account of Nancy becoming truly unlikable. However, it's worth watching for the ridiculously funny Kevin Nealon, who plays Doug Wilson, a man who loves his weed, and is happy to do anything to keep it in his life. 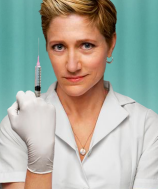 Nurse Jackie premieres tonight at 10:30pm ET/PT tonight, also on Showtime. I wasn't so sure I'd like this one, despite being a major Edie Falco fan. My quota of medical dramas dried up after St. Elsewhere went off the air. (True. I've hardly watched ER and will not watch Grey's or Private Practice). Having viewed the premiere, it looks unsettling and yet compelling. You can't take your eyes off Falco as she bulldozes her way through hospital corridors, hyped up on meds snorted straight from the pharmacy cabinet to stay on her feet. A nurse with a bad back is a nurse unemployed, after all.

You can view the first episode of Nurse Jackie on the Showtime website.
Posted by TVBlogster at 8:50 AM