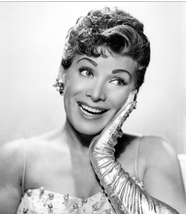 Over at www.aspecialthing.com, Jen Kirkman started a thread about comedian Jean Carroll, one of the first female stand up comics who paved a way for Phyllis Diller, Totie Fields and Joan Rivers to express their funny bone talents to the masses. She passed away on New year's day at the age of 98. I have to admit, if it wasn't for Kirkman's post, I might not have been aware of this lady's talent. Yet, her story and comedy immediately intrigued me.

Carroll, (whose legal name was Celine Howe) tread the comedy circuit of the 1940's and 50's - when vaudeville's flame was beginning to fade out and the men got yuks off their Catskill experience. She had her own television show on ABC, was a mother, a housewife, and loved telling jokes about sitting by the pool with ladies who talked trash. Carroll was ahead of her time, and sadly a generation of comedy nerds (like me), were out of the loop.

To top it all off, she was a beauty. A jewish beauty. Her jokes are as fresh today as they were then. So, next time you see the hilarious Sarah Silverman sing songs about poop, remember Jean Carroll. Having done a little research into her comedy, I've a feeling she probably liked Sarah, because this lady had some sass beneath her sweet exterior.

Sean McCarthy has a wonderful tribute over at The Comic's Comic.

NYTimes. Obit. Jean Carroll.
Posted by TVBlogster at 9:18 AM