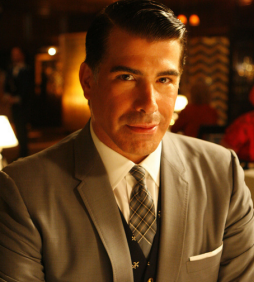 As per TV Guide Magazine, not only has Mad Men's Salvatore Romano lost his job with Sterling Cooper, but Bryan Batt has lost his as well. Showrunner Matthew Weiner has confirmed that the character of Sal will not return to the show, much to Batt's surprise. “I was supposed to be notified by December 31, and nothing." Sadly, it meant he was not coming back for season 4.

What a shame. Although the firing of Batt's TV persona was sad, it worked well within the context of the times. However, Weiner has given us this character, a gay man living a lie in a world where he is yet to be accepted. It was expected that we'd see his personal tragectory continue as the cultural shifts of the decade unfold and sexual liberation prevades. The 60's ended with the Stonewall uprising in 1969 after all.

Surely, Sal could have snagged another job at another agency and found himself working competitively against Sterling, Cooper, Draper and Pryce? Advertising can be a small world. It's disappointing that we won't see Sal's character finding his own way among societal changes - especially with that heart of gold he carries around inside. My hope is that Sal found himself, lives the way he wants to live, with the person he wants to love openly - and is the wealthy proprietor of a Soho art gallery. In my mind, Sal lives righteously.
Posted by TVBlogster at 11:08 AM