Community Picked Up for Second Season 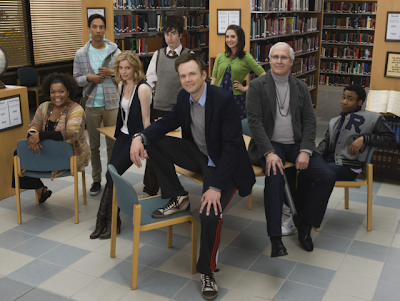 It's a nice feeling to see a underdog television show like Community get the green light for season two. It's fresh. It's funny. The cast is solid. Joe McHale rules and Chevy Chase seems to be back to his old wry self. Series showrunner Dan Harmon video taped the cast in Makeup as he broke the good news. I think Chevy Chase was still alive. You can't really tell. (You can see it here).

Also wisely picked up by the bizarro peacock network was 30 Rock and Parks and Recreation. Good news for all comedy fans. However, The Office will be groaning and thumping it's way into a seventh season since they've been renewed as well. How much more blood can they mine out of this stone?
Posted by TVBlogster at 2:28 PM

Email ThisBlogThis!Share to TwitterShare to FacebookShare to Pinterest
Labels: 30 Rock, Community, Parks and Recreation, The Office