'Party Down' on DVD 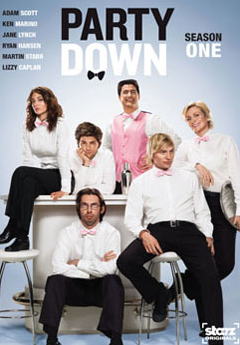 Good news! Party Down season one comes out on DVD April 6th.

Here's even better news: Party Down season two premieres April 23rd at 10pm ET/PT on the Starz Network. Starring Adam Scott, Ken Marino, and Martin Starr it made some waves among comedy lovers in TV land. New to the cast this season is Megan Mullally who replaces Jane Lynch who left the show to join the cast of Glee last season. Happily, Lynch will return in a guest role. Also showing up this season will be Thomas Lennon and Kristin Bell.
Posted by TVBlogster at 11:40 AM